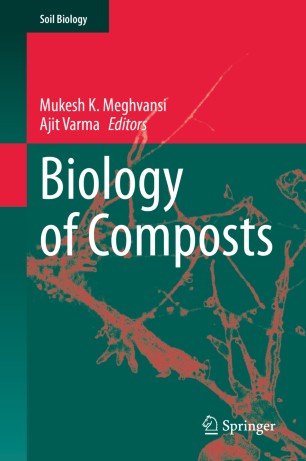 This book highlights the latest findings on fundamental aspects of composting, the interaction of various microorganisms, and the underlying mechanisms. In addition to addressing modern tools and techniques used for composting research, it provides an overview of potential composting applications in both agriculture and environmental reclamation.

Composting is the process of organic waste decomposition, mediated by microorganisms. The end-product is called ‘compost’ and can be used as a supplement to improve soil fertility. As the municipal waste generated in most developing countries contains a substantial amount of organic matter suitable for composting, this technology offers a win-win opportunity for stakeholders in terms of disposing of organic waste and providing organic fertilizers for agriculture. In addition, using compost reduces the dependency on harmful chemical fertilizers, and represents a sustainable and environmentally friendly alternative.

Dr. Mukesh K. Meghvansi, earned his PhD from MDS University, Ajmer (India) under a Euro Commission-sponsored project. After serving as lecturer at Bundelkhand University Jhansi (India) for a stint, he joined as a scientist in Defence R & D Organisation, Govt of India in 2008. He has more than fifty publications in various international/national journals. He has edited/authored three books including a Springer publication ‘Organic Amendments and Soil Suppressiveness’ under Soil Biology series. Currently he is engaged in R & D on biodegradation of human faecal matter.

Prof. Dr. Ajit Varma obtained his PhD from Allahabad University (India). He served as professor at School of Life Science, Jawaharlal Nehru University, Delhi for about three decades. Currently, he is working as Distinguished Scientist & Professor of Eminence at Amity University, Noida, Delhi-NCR, India. He has published over 290 articles in National and International journals,38 books in the area of Microbial Technology, published by Academic Press, London, CRC Press, Florida, USA, IDRC, Canada and Springer-Verlag, Germany. He was nominated as Editor-in-Chief by Springer-Verlag (Germany & New York), to prepare 50 volumes on Soil Biology. He is recipient of a number of international awards/fellowships including Commonwealth Fellowship (Australia), Alexander von-Humboldt fellowship (Germany), DAAD Fellowship (Germany) and many more. He is fellow of several national and international professional bodies including National Academy of Agriculture Sciences (India), International Society of Symbiosis (USA) and  Indian Science Congress Association.