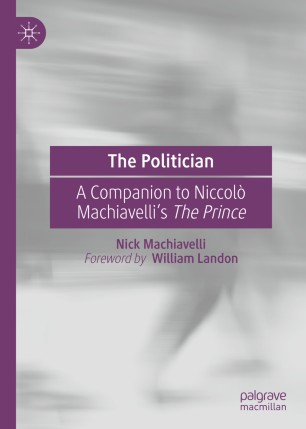 A Companion to Niccolò Machiavelli’s The Prince

“This book offers a useful and original contribution to the field as the author renders a convincing picture of the politician as a human being with a complex personality, characterized by such different motivations as idealism, careerism, lust of power, as well as possessing a weak spot for money, sex, alcohol and all the interesting things in life! Recommended for students and politicians, it is both a work in political science and political theory, and a handbook for prospective politicians.”

The age of princes has passed, but the age of politicians is at its heights. So is Niccolò Machiavelli’s The Prince any less relevant? No. But it needs an update, to reflect the political realities of our times. That is the purpose of this groundbreaking book—a guide to success in contemporary politics, where the democratically-elected politician has assumed the role of the classical prince. Here is revealed how a politician must act if she wants to be successful, how she must plot her every move, whether dealing with colleagues, constituents, family members, bureaucrats, lobbyists or the media.

Indeed, this book is unique, for it exposes at a level of detail never seen before the inner workings of the mind of the contemporary politician. And while it may prove an asset to aspiring politicians, its frank and honest nature will no doubt strike fear in the hearts of incumbent politicians as it sheds light on their motives, intentions, and aspirations.

“Nick Machiavelli” has been active politically since the age of thirteen, when he first worked as a canvasser in a local election campaign. Two years later he attended his first national political convention. At present he is a practicing politician, with several elections to his credit. He admits to employing many though certainly not all of the means he describes in The Politician, and only for the very best of centrist ends.