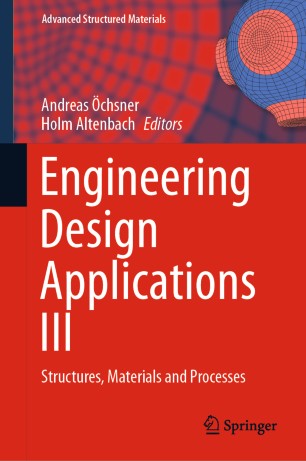 This book provides an update on recent advances in various areas of modern engineering design, such as mechanical, materials, computer, and process engineering, which provide the foundation for the development of improved structures, materials, and processes. The modern design cycle is characterized by the interaction of different disciplines and a strong shift toward computer-based approaches involving only a small number of experiments for verification purposes. A major driver for this development is the increased demand for cost reduction, which is also connected to environmental demands. In the transportation industry (e.g. automotive or aerospace), where there is a demand for greater fuel efficiency, one solution is lighter structures and/or improved processes for energy conversion. Another emerging area is the interaction of classical engineering with the health and medical sector.

Prof. Dr.-Ing. habil. Dr. h. c. mult Holm Altenbach is a member of the International Association of Applied Mathematics and Mechanics (GAMM) a Foreign Member of the Russian Academy of Sciences; and the International Research Center on Mathematics and Mechanics of Complex Systems (M&MoCS), Italy. He has held positions at the Otto von Guericke University Magdeburg and at the Martin Luther University of Halle-Wittenberg, both in Germany.
He graduated from Leningrad Polytechnic Institute in 1985 (diploma in Dynamics and Strength of Machines). He defended his Ph.D. in 1983 and was awarded his Doctor of Technical Sciences in 1987, both at the same institute. He is currently a Full Professor of Engineering Mechanics at the Otto von Guericke University Magdeburg, Faculty of Mechanical Engineering, Institute of Mechanics (since 2011), and has been acting as the Director of the Institute of Mechanics since 2015.
His areas of scientific interests are general theory of elastic and inelastic plates and shells, creep and damage mechanics, strength theories, and nano- and micromechanics. He is the Author/Co-Author/Editor of 60 books (textbooks/monographs/proceedings), approximately 380 scientific papers (among them 250 peer-reviewed), and 500 scientific lectures. He is Managing Editor (2004 to 2014) and Editor-in-Chief (2005–to date) of the Journal of Applied Mathematics and Mechanics (ZAMM) – the oldest journal in Mechanics in Germany (founded by Richard von Mises in 1921). He has been Advisory Editor of the journal “Continuum Mechanics and Thermodynamics” since 2011, Associate Editor of the journal “Mechanics of Composites” (Riga) since 2014, Doctor of Technical Sciences, and Co-Editor of the Springer Series “Advanced Structured Materials” since 2010.
He was awarded the 1992 Krupp Award (Alexander von Humboldt Foundation); 2000 Best Paper of the Year—Journal of Strain Analysis for Engineering Design; 2003 Gold Medal of the Faculty of Mechanical Engineering, Politechnika Lubelska, Lublin, Poland; 2004 Semko Medal of the National Technical University Kharkov, Ukraine; 2007 Doctor Honoris Causa, National Technical University Kharkov, Ukraine; 2011 Fellow of the Japanese Society for the Promotion of Science; 2014 Doctor Honoris Causa, University Constanta, Romania; 2016 Doctor Honoris Causa, Vekua Institute, Tbilisi, Georgia; 2018 Alexander von Humboldt Award (Poland).