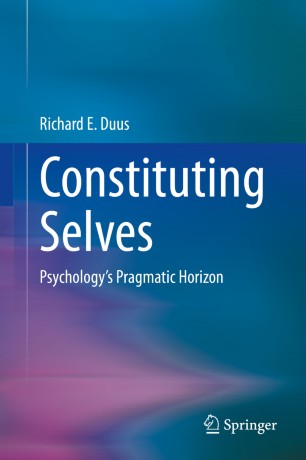 This book aims to provide a unique perspective and definition of the self in psychological literature, filling the gap between psychological science and practical implementation of interventions presented to psychotherapy clients. Combining insights from a broad range of interdisciplinary literature and multiple perspectives on the self and identity, the author seeks to determine whether an independent reality exists behind the term ‘self’ and what the nature of that reality might be.

Among the topics discussed:

Constituting Selves: Psychology's Pragmatic Horizon will be of interest to clinicians and psychologists seeking to challenge preexisting conceptualizations and definitions of the self in current psychological literature.

Rich Duus, Ph.D: ​I have practiced psychology in the Duluth area of Minnesota since 1987. My undergraduate work was done in Sioux Falls, South Dakota at Augustana College after which I spent some time in military service in the officer corp.  I then went to Eastern Washington University which was finished in 1975 with a Master's of Science in experimental and clinical psychology, and went from there to Utah State University in Logan, Utah where the Ph.D. with a behavioral psychology specialty was completed in 1982. I worked in Brainerd, Minnesota at the Brainerd Regional Treatment Center and in Northland Mental Health Center in Grand Rapids, Minnesota until1987 when I took a position in the Behavioral Health Unit of the Duluth Clinic, a large medical center in Duluth area. Practicing in that position for about 9 years, in 1996 I opened a group practice which was initially called the Duluth Psychological Services, and by the next year became the Duluth Psychological Clinic, dedicated to using current psychological research and theory with the usual affiliations with area hospitals.  Presently the professional practice of psychology is reduced while increasing the time dedicated to writing and research.  I have a dedicated interest at this time in the theoretical conceptions and practical manifestations of the self as it affects the practice of psychotherapy, influences how research is done, and generally affects how we pursue the usual business of psychology.  More general research interests include hermeneutical perspectives within psychology, phenomenological psychology, ecological perspectives of social constructivism, the practical implementation of fairness in establishing peace, spiritual and religious experience from a psychological perspective, and psychotherapy and change processes.  I am increasingly interested in pursuing the ways in which philosophy, such as presented by people such as Gadamer, Ricoeur, Rorty, Dewey, James, Lynn Rudder Baker, Bernstein, and others can benefit psychological investigation and science.

In 2013, an investigation of what came to be called the self-aporetic became a serious pursuit with a series of separate inquiries that became the book project in which the suggested name Constituting Selves:  Psychology’s Pragmatic Horizon evolved.  During this time shorter book reviews, journal articles, and as well reviewing some paper submissions to the Journal of Theoretical and Philosophical Psychology was helpful in keeping a focus on the undertaken self project.  A pursuit of the wide variety of literature addressing the self-aporetic led to many surprises; one of the most significant was the intricate connection with pragmatic philosophical perspective beginning with William James and George Herbert Mead and leading to Charles Sanders Peirce.  An other surprising realization during this series of inquiries was that intersubjectivity has not been significantly addressed in the psychological literature with noteworthy exceptions, especially Mead.  The reasons for this circumstance include a preoccupation with natural science, but perhaps more importantly a liberal framework of European culture and its pursuit of democratic social infrastructures that privileges the individual.  I continue to do clinical work with the utilization of hypnosis in therapy and medical problems at the Duluth Psychological Clinic.  My time is primarily with the inquiries described and with writing.  Philosophically and as well practically the professional trajectory has been reasonably varied.