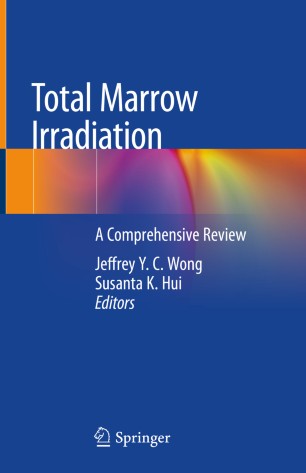 This book, written by a team of international experts, concisely reviews the rationale and clinical application of image-guided total marrow irradiation, a rapidly emerging area in radiation oncology and hematopoietic cell transplantation. The aim is to provide the practicing radiation oncologist, hematologist, medical physicist, and bone marrow transplant researcher with a fundamental understanding of key aspects and an appreciation of the increasing significance of total marrow irradiation as conditioning for bone marrow transplantation. Detailed attention is paid to the impacts of recent advances in radiation therapy technology, functional PET and MRI, and understanding of the response of bone marrow to radiation.  Full consideration is also given to the ways in which technological advances in image-guided radiation therapy have created new opportunities to treat bone marrow transplant patients with limited transplant options due to advanced disease, age, or co-morbidities. Further topics covered include the ways in which cancer stem cells and the marrow microenvironment influence response to radiation therapy and the implementation of new-generation predictive radiobiologic factors in the clinic.

Jeffrey Wong MD, FASTRO, is Professor and Chair in the Department of Radiation Oncology at City of Hope Cancer Canter in Los Angeles, California. His research interests have focused on the development of image-guided and biologically targeted radiation therapy, radioimmunotherapy, radioimmunoimaging, and the use of radiation therapy in hematopoietic cell transplantation. He and his colleagues pioneered the use of total marrow irradiation (TMI), successfully treating the first patient in 2005, and ushering in a new era in bone marrow transplantation. To date hundreds of patients have been treated with TMI at City of Hope, which has one of the largest bone marrow transplant programs in the world. Dr. Wong and the City of Hope team have also collaborated with colleagues to initiate TMI programs in North America, Europe, and Asia and are dedicated to the international adoption and the continued development of this rapidly emerging and promising new area.

Susanta Hui, PhD, DABR, is Professor in the Department of Radiation Oncology at City of Hope Cancer Center. While at the University of Wisconsin, he was part of a team that developed the first CT-guided helical intensity modulated radiation therapy unit, paving the way for the conceptual development of total marrow irradiation. He and colleagues at the University of Minnesota initiated one of the first TMI trials in pediatric leukemia. Dr. Hui and colleagues lead an international consortium dedicated to expanding TMI research and clinical investigations in Europe and the United States.  His research interests are in the areas of radiation oncology physics, quantitative imaging, biophysical characterization of the bone marrow environment, imaging and dosimetric optimization of TMI, and the radiation response of leukemic stem cells and the bone marrow environment.