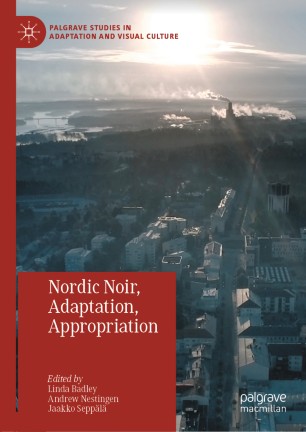 This book argues that adaptation is an underrecognized yet constitutive element of Nordic noir. In so doing, it reframes the prevailing critical view. Now celebrated for its global sweep, Nordic noir is equally a transmedial phenomenon. Nordic Noir, Adaptation, Appropriation deploys the tools of current adaptation studies to undertake a wide-ranging transcultural, intermedial exploration, adding an important new layer to the rich scholarship that has arisen around Nordic noir in recent years.

Andrew Nestingen is Professor of Scandinavian Studies at the University of Washington, USA. His books include Crime and Fantasy in Scandinavia (2011) and Scandinavian Crime Fiction (co-edited with Paula Arvas, 2011). Jaakko Seppälä, Docent in Film and Television Studies at the University of Helsinki, Finland, has published various articles in film and television style, transnational film history and close analysis of meanings.

“Ingenious in its conception and with consistently strong original contributions, Nordic Noir, Adaptation, Appropriation re-visits the Nordic noir phenomenon to probe previously unexplored complexities. The volume’s rich interventions show us that Nordic noir, far from being a static genre, is a constantly evolving cultural form, with a mobility within and beyond the North due to diverse processes of adaptation and appropriation. Nordic Noir, Adaptation, Appropriation redefines the debates and deserves the broadest possible readership.” (Mette Hjort, Hong Kong Baptist University)

“How did a crime scene as distinctive as Scandinavia take such a decisive role in the global community of mystery and suspense fiction, infecting the whole world with its chilly mystique? This volume raises many fruitful questions concerning Nordic Noir as a network, brand, or family; its repurposing of distinctively American crime formulas; its systematic mingling of local and universal elements; its use as a vehicle to spotlight a relatively neglected native culture; its affinities with the Western; the relation of its remakes to robots who resemble their human models closely but not too closely; the importation of its leading stylistic devices by films and television programs produced in other countries; and its influence on Viking revival cinema and television. Put down your TV’s remote control and stop binge-watching your Nordic Noir favorites for long enough to dive into this remarkably varied and illuminating collection. You'll be glad you did.” (Thomas Leitch, University of Delaware)

“This book is an excellent exploration of the way in which adaptation and appropriation are constitutive features of Nordic noir. Each chapter offers an original take, furthering scholarly and popular understanding of Nordic noir. The book is a valuable contribution to film and media studies as well as studies in adaptation and cross-media inspiration and simulation.” (Eva Novrup Redvall, University of Copenhagen)

“This collection offers a broad and multi-faceted view of feature films, television series, novels and other artistic media types and highlights the complex webs of transmediation among these. It compellingly argues that adaptation to different media types and cultural settings is central to Nordic noir’s development. Nordic Noir, Adaptation, Appropriation will be a point of reference for all further research on Nordic noir.” (Lars Elleström, Linnaeus University)