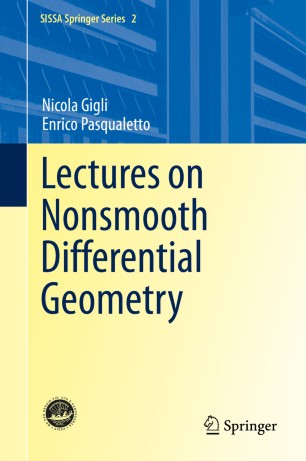 This book provides an introduction to some aspects of the flourishing field of nonsmooth geometric analysis. In particular, a quite detailed account of the first-order structure of general metric measure spaces is presented, and the reader is introduced to the second-order calculus on spaces – known as RCD spaces – satisfying a synthetic lower Ricci curvature bound. Examples of the main topics covered include notions of Sobolev space on abstract metric measure spaces; normed modules, which constitute a convenient technical tool for the introduction of a robust differential structure in the nonsmooth setting; first-order differential operators and the corresponding functional spaces; the theory of heat flow and its regularizing properties, within the general framework of “infinitesimally Hilbertian” metric measure spaces; the RCD condition and its effects on the behavior of heat flow; and second-order calculus on RCD spaces. The book is mainly intended for young researchers seeking a comprehensive and fairly self-contained introduction to this active research field. The only prerequisites are a basic knowledge of functional analysis, measure theory, and Riemannian geometry.

Nicola Gigli studied Mathematics at the Scuola Normale Superiore of Pisa and is Professor of Mathematical Analysis at SISSA, Trieste. He is interested in calculus of variations, optimal transport, and geometric and nonsmooth analysis, with particular focus on properties of spaces with curvature bounded from below.

Enrico Pasqualetto earned his PhD degree in Mathematics at SISSA (Trieste) in 2018 and is currently a postdoctoral researcher at the University of Jyväskylä. His fields of interest consist in functional analysis and geometric measure theory on non-smooth metric structures, mainly in the presence of synthetic curvature bounds. Within this framework, his research topics include rectifiability properties, Sobolev spaces, and sets of finite perimeter.