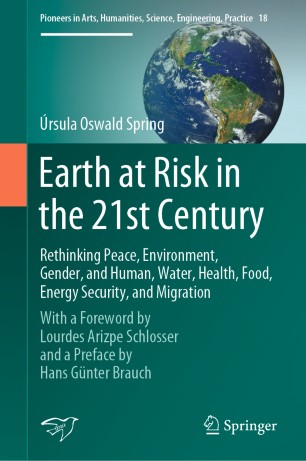 Earth at Risk in the 21st Century offers critical interdisciplinary reflections on peace, security, gender relations, migration and the environment, all of which are threatened by climate change, with women and children affected most. Deep-rooted gender discrimination is also a result of the destructive exploitation of natural resources and the pollution of soils, water, biota and air. In the Anthropocene, the management of human society and global resources has become unsustainable and has created multiple conflicts by increasing survival threats primarily for poor people in the Global South. Alternative approaches to peace and security, focusing from bottom-up on an engendered peace with sustainability, may help society and the environment to be managed in the highly fragile natural conditions of a ‘hothouse Earth’. Thus, the book explores systemic alternatives based on indigenous wisdom, gift economy and the economy of solidarity, in which an alternative cosmovision fosters mutual care between humankind and nature.

• Special analysis of risks to the survival of humankind in the 21st century.

• Alternative proposals from the Global South with indigenous wisdom for saving Mother Earth.

Úrsula Oswald Spring (Mexico) is full time Professor/ Researcher at the National University of Mexico (UNAM) in the Regional Multidisciplinary Research Centre (CRIM). She was national coordinator of water research for the National Council of Science and Technology (RETAC-CONACYT), first Chair on Social Vulnerability at the United National University Institute for Environment and Human Security (UNU-EHS); founding Secretary-General of El Colegio de Tlaxcala; General Attorney of Ecology in the State of Morelos (1992-1994), National Delegate of the Federal General Attorney of Environment (1994-1995); Minister of Ecological Development in the State of Morelos (1994-1998). She has worked for the Intergovernmental Panel on Climate Change (IPCC) and the Mexican PINCC. She was President of the International Peace Research Association (IPRA, 1998-2000), its Secretary General (2016-2018), where she organised the IPRA General Conference in Ahmedabad, India. She was also General Secretary of the Latin American Council for Peace Research (2002-2006) and is the Honours President of CLAIP. She has studied medicine, clinical psychology, anthropology, ecology, classical and modern languages, and obtained her PhD from the University of Zürich (1978). For her scientific work she received the Sor Juana Inés de la Cruz Prize (2005), the Environmental Merit in Tlaxcala, Mexico (2005, 2006), and the UN Development Prize. She was recognised as Academic Women by UNAM (1990 and 2000) and Women of the Year (2000). She works on nonviolence and sustainable agriculture with groups of peasants and women and is President of the Advisory Council of the Peasant University. She has written 57 books and over 386 scientific articles and book chapters on sustainability, climate change, adaptation, water, gender, development, poverty, drug consumption, brain damage due to chronic under-nourishment, peasantry, social vulnerability, genetic modified organisms, bioethics, and human, gender, and environmental security, peace and conflict resolution, democracy, and conflict negotiation