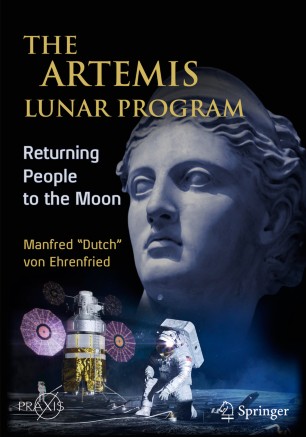 Returning People to the Moon

This book describes the future of the Artemis Lunar Program from the years 2017 to about 2030. Despite the uncertainty of the times and the present state of space exploration, it is likely that what is presented in this book will actually happen, to one degree or another. As history has taught us, predictions are often difficult, but one can see enough into the future to be somewhat accurate. As the Bible says, “We
see thru the glass, but darkly.”
All of the elements of the proposed program are described from several perspectives: NASA’s, the commercial space industry and our International partners. Also included are descriptions of the many vehicles, habitats, landers, payloads and experiments. The book tells the story of the buildup of a very small space station in a strange new lunar orbit and the descent of payloads and humans, including the first women and next man, to the lunar surface with the intent to evolve a sustained presence over time.

Dutch Von Ehrenfried has worked in both the space flight and aviation fields for about 25 years. He was a NASA Flight Controller in Mission Control for many Mercury, Gemini and Apollo Missions. Dutch also worked on some of the Apollo Lunar Experiment Packages from an operations point of view as well as experiments that went into Skylab from an Earth Resources Program perspective. He later worked in the NASA Headquarters Space Station Task Force and the Program Office as a contractor for about 10 years, and the FAA Aviation Safety Office for a year. In recent years he has written several insightful books in the Springer-Praxis series.

“The book is an excellent basis to understand the further struggle for human space exploration of Moon and Mars, and allows the reader to form his own well-founded opinion and to grasp the technical problems still to be solved. … A ‘treat’ for insiders, a reference manual for those interested in human spaceflight and an easily digestible book for laypeople. Predicate: Highly valuable!” (Joachim J. Kehr, Journal of Space Operations & Communicator, February, 2021)