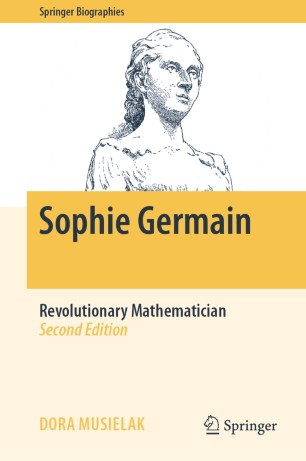 Sophie Germain stood right between Gauss and Legendre, and both publicly recognized her scientific efforts. Unlike her female predecessors and contemporaries, Sophie Germain was an impressive mathematician and made lasting contributions to both number theory and the theories of plate vibrations and elasticity. She was able to walk with ease across the bridge between the fields of pure mathematics and engineering physics. Though isolated and snubbed by her peers, Sophie Germain was the first woman to win the prize of mathematics from the French Academy of Sciences. She is the only woman who contributed to the proof of Fermat’s Last Theorem.

Sophie Germain – Revolutionary Mathematician paints a rich portrait of the brilliant and complex woman, including the mathematics she developed, her associations with Gauss, Legendre, and other leading researchers, and the tumultuous times in which she lived. In this unique biography, Dora Musielak has done the impossible―she has chronicled Sophie Germain’s brilliance through her life and work in mathematics, in a way that is simultaneously informative, comprehensive, and accurate.

Dr. Dora Musielak is a Research Professor at the University of Texas-Arlington where she teaches advanced mathematics to doctoral students of science and engineering. She is a NASA Fellow and recipient of other honors. Passionate about the history of science, Dora Musielak is the author of Sophie’s Diary, a mathematical novel published by the Mathematical Association of America (MAA), and The Princess and the Mathematician, short stories based on the exact sciences. In 2018 she published Euler Celestial Analysis, a biography of Leonhard Euler that highlights his contributions to mathematical astronomy.

“The revised title and the book itself make the case that Sophie Germain was an extraordinary one-off, a remarkable woman who overcame incredibly unfair obstacles to achieve greatness, and paved the way for others. The documentary evidence discovered and synthesized here by Dora Musielak is far richer than I would have thought possible, and supports the title’s claim that Sophie Germain was a ‘Revolutionary Mathematician’.” (Dora Musielak, MAA Reviews, November 7, 2020)