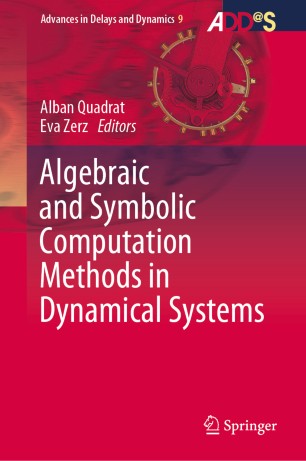 Part of the Advances in Delays and Dynamics book series (ADVSDD, volume 9)

This book aims at reviewing recent progress in the direction of algebraic and symbolic computation methods for functional systems, e.g. ODE systems, differential time-delay equations, difference equations and integro-differential equations. In the nineties, modern algebraic theories were introduced in mathematical systems theory and in control theory. Combined with real algebraic geometry, which was previously introduced in control theory, the past years have seen a flourishing development of algebraic methods in control theory. One of the strengths of algebraic methods lies in their close connections to computations. The use of the above-mentioned algebraic theories in control theory has been an important source of motivation to develop effective versions of these theories (when possible). With the development of computer algebra and computer algebra systems, symbolic methods for control theory have been developed over the past years. The goal of this book is to propose a partial state of the art in this direction. To make recent results more easily accessible to a large audience, the chapters include materials which survey the main mathematical methods and results and which are illustrated with explicit examples.