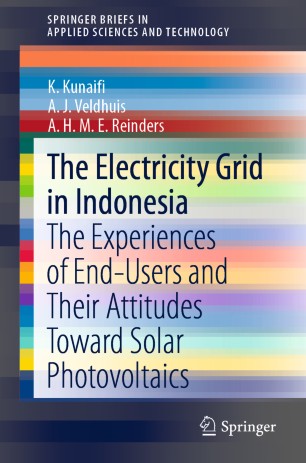 The Electricity Grid in Indonesia

The Experiences of End-Users and Their Attitudes Toward Solar Photovoltaics

In 2017, nearly 60 million households in Indonesia were connected to the national power grid. Accordingly, we believe that their ‘voice’ is important to maintain democratic and participatory values in planning electricity services. However, what is actually the voice of electricity users in Indonesia? Also, what can we learn from it when looking at the fitness of the electricity supply in Indonesia in the context of costs, reliability, and environmental aspects?

This book presents the real experience of households, some of the grid users in Indonesia. Through a series of surveys in 2017, households in three cities in Western, Central, and Eastern Indonesia shared their experiences and preferences regarding their electricity supply. They offered their opinions about the stability and reliability of electricity supply, how they coped with blackouts, and what impacts power interruptions had on their daily lives. Because of the frequent power outages, the users started to think about the importance of having a back-up power generator at home. Given that Indonesia has high solar irradiance the whole year through, we also observed the users’ attitudes toward solar photovoltaic (PV) systems.

The book starts with a brief introduction about Indonesia followed by the status and challenges of power supply in the country. Then, in the middle section, the users’ voices are presented. Finally, the potential of PV systems, as a promising solution to increasing electricity access and improving the reliability of electricity supply in this tropical country, is presented. We believe that this book provides useful information for the transition to the use of solar energy in energy systems in Indonesia, which is meant for academia, electric utility companies, PV system actors, policymakers, and of course, households in Indonesia.

K. Kunaifi received an M.Sc. in Renewable Energy from Murdoch University – Western Australia in 2009 and is currently pursuing a Ph.D. degree in solar photovoltaic system applications at the University of Twente in The Netherlands. He has been a lecturer at UIN Suska Riau University in Indonesia for more than ten years. His education and research areas include renewable energy, energy efficiency, and sustainability.

A.J. Veldhuis received an M.Sc. in Sustainable Energy Technology and a Ph.D. in Mechanical Engineering from the University of Twente in 2011 and 2015 respectively. He was then a postdoctoral researcher at the University of Oxford for two years, before he moved to Zown as a Technical Engineer and further to his present position at Alliander N.V., where he works as a consultant and on the engineering of microgrids. His research includes techno-economic modeling and simulation of energy systems.
A.H.M.E. Reinders received an M.Sc. in Experimental Physics at Utrecht University (1993) where she also received her Ph.D. degree (1999) in Chemistry. At present, she is a part-time professor at Eindhoven University of Technology (TU/e), an Associate Professor at the University of Twente, and a visiting professor at the School of Photovoltaics & Renewable Energy Engineering of UNSW in Sydney, Australia. In the past, she conducted research at Fraunhofer Institute of Solar Energy in Freiburg, the World Bank in Washington D.C., ENEA in Naples, Center of Urban Energy in Toronto and in Indonesia, and she was a professor of Energy-Efficient Design at TU Delft. Based on these experience she developed a new approach towards energy research that is design-driven in scope. Since 2017 she has been the chair of the EU COST Action PEARL PV on the performance of PV systems and she is conducting projects on smart energy systems. She is known to her book ‘The Power of Design – Product Innovation in Sustainable Energy Technologies’ (2012) and ‘Photovoltaic Solar Energy from Fundamental to Applications’ (2017) and for her involvement in the international IEEE PVSC conference which she chaired in 2014 and 2017. In 2010 she co-founded the IEEE Journal of Photovoltaics for which she serves as an editor. She has also involved in various tasks of the International Energy Agency PVPS program, including Task 1 on Strategic PV Analysis & Outreach and Task 17 on PV for Transport.