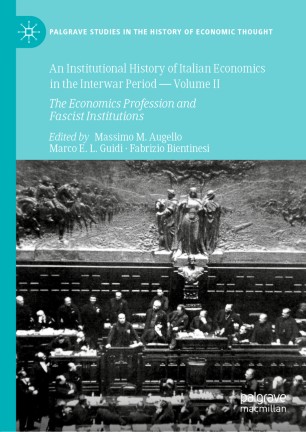 The Economics Profession and Fascist Institutions

Italy is well known for its prominent economists, as well as for the typical public profile they have constantly revealed. But, when facing an illiberal and totalitarian regime, how closely did Italian economists collaborate with government in shaping its economic and political institutions, or work independently? This edited book completes a gap in the history of Italian economic thought by addressing in a comprehensive way the crucial link between economics and the fascist regime, covering the history of political economy in Italy during the so-called “Ventennio” (1922-1943) with an institutional perspective. The approach is threefold: analysis of the academic and extra-academic scene, where economic science was elaborated and taught, the connection between economics, society and politics, and the dissemination of scientific debate. Special attention is given to the bias caused by the Fascist regime to economic debate and careers. This Volume II looks at the role that economists played in society and in politics, and how this was played. In exploring the public side of the profession and the “fascistisation” of institutions, this book also examines academic epuration and emigration, and the post-WW2 purge of fascist economists.

Volume I (available separately) explores how the economics profession was managed under fascism, the restructuring of higher education, the restriction of freedom in teaching and of the press, and various fascist cultural and propaganda initiatives.

Massimo M. Augello is Professor of History of Economic Thought at the University of Pisa and former Rector of this University. He has coordinated various projects on the institutionalisation, professionalisation and dissemination of economics. His contributions have been published in over 20 edited volumes, and in a range of international journals.

Marco E.L. Guidi is Professor of History of Economic Thought at the University of Pisa. He has been visiting professor at various French universities, and coordinator of a European project on economic translation. His works have been published in various edited books and international journals.

Fabrizio Bientinesi is Professor of History of Economic Thought at the University of Pisa. His research interests are concentrated on the history of Italian economics and the history of international trade theory. He is the author of various papers published in a range of journals of history.