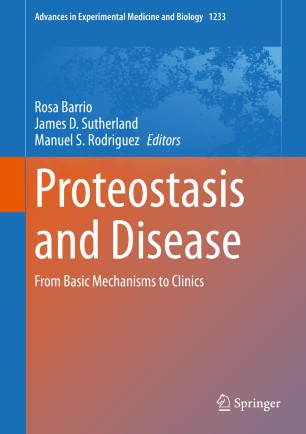 From Basic Mechanisms to Clinics

Part of the Advances in Experimental Medicine and Biology book series (AEMB, volume 1233)

Highlighting the latest research in the field of protein homeostasis and its implications for various clinically relevant diseases, the book appeals to researchers and clinicians, while also offering a reference guide for scholars who are new to the field.

Rosa Barrio obtained her PhD in the Centre of Molecular Biology Severo Ochoa (Madrid, Spain) on the study of ubiquitin genes in Drosophila. Since then, she was interested on the effect of ubiquitin-like molecules on relevant transcription factors involved in organismal development and physiology. After her postdoctoral training at European Molecular Biology Laboratory (Heidelberg, Germany), she is a principal investigator in the Functional Genomics Unit of CIC bioGUNE (Derio, Spain) since December 2004. Using Drosophila as a model system, her laboratory unveiled the role of SUMOylation in vivo in the processes of steroidogenesis through the regulation of the Steroidogenic Factor 1, and development through the regulation of the Spalt-like factors (SALL) and ciliogenesis. The laboratory developed technology for the study posttranslational modifications by members of the ubiquitin family, and apply this technology for the analysis of the ubiquitin code.

Jim Sutherland is a developmental/cellular biologist studying protein homeostasis regulation in the primary cilia. His doctoral research on USP/DHR38 heterodimers and the Drosophila ecdysone response was completed at Harvard University and EMBL under the supervision of Dr. Fotis Kafatos. His post-doctoral research was focused on the functional analysis of profilin and regulation of the actin cytoskeleton in the mouse (Witke Group, EMBL Rome) and on the role of TES in cellular adhesion (Way Group, Cancer Research UK, London). In 2005, he joined the Cooperative Research Centre bioGUNE (CIC bioGUNE) as a staff researcher. He develops novel tools for studying modifications by ubiquitin and ubiquitin-like proteins. These are applied towards understanding primary cilia formation and function, with special focus on Townes Brock Syndrome, a rare ciliopathy caused by SALL1 mutations and characterized by developmental defects and kidney dysfunction.

Manuel S Rodriguez obtained his PhD degree in microbiology at Pasteur Institute (Paris, France). Early in his carrier he became interested in the role of ubiquitin family members in the regulation of critical cellular factors such as those involved in the immune response, apoptosis or oncogenesis. He was particularly intrigued by the role of ubiquitin-like proteins (UbLs) in the regulation of protein homeostasis in situations when two or more members of this family were acting on the same protein or pathways. Some of his work was oriented to study the regulation of NF-kB and the tumour suppressor p53. More recently his efforts have been oriented to the study of the crosstalk between the ubiquitin proteasome and autophagy-Lysosome systems. His group became particularly interested in a selective autophagy mechanism named proteaphagy that appears to regulate the pool of 26S proteasome in response to proteasome inhibition. Among other contributions he developed methods to study post-modification events and its functional consequences. Including ubiquitin capturing systems (named TUBEs) based in the tandem disposition of ubiquitin binding domains and a version of SUMO-traps that have been used to study the response of the cell to distinct stimuli/infections. Manuel S. Rodriguez is currently a group leader at the Institute for advanced technologies in life sciences (ITAV) from the CNRS (Toulouse, France).