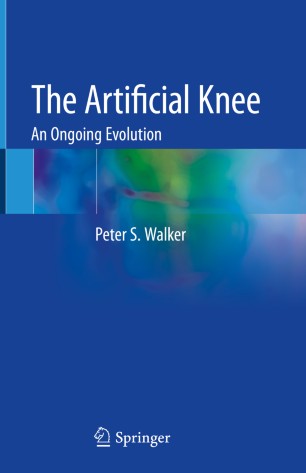 Spanning both the history and future of knee replacement, this unique book recounts how artificial knees have reached the stage they are today, and whether their performance can be further improved. The author, who has been designing artificial knees for 50 years, starts the story in the late 1960’s with the early pioneers; during the 1970’s, the principles for successful artificial knees were established. While many different types were designed, a small number have become by far the most widely utilized. Yet other types of designs, so far little used, along with new materials and the application of computer-assisted surgery, could result in significant advancements in the treatment of knee arthritis.
Each chapter provides a detailed description of the origins of the ideas and principles and their rationale, followed by the latest information and evidence. The book begins with an overview of the history and background of the artificial knee, in terms of design and implementation and the thought leaders involved. Fixation, biomechanics, and the types of designs are discussed in detail, both what has worked and what has not, and why. Instrumentation, testing and tribology, and functional evaluation methods are also covered. The book concludes with a look toward the future possibilities for the field of artificial knees. An illustrated glossary of terms, is included for quick reference.
The Artificial Knee: An Ongoing Evolution will appeal to orthopedic surgeons and researchers, medical academics and orthopedic companies, and to those with a general interest in artificial knees.

Peter S. Walker, PhD, Department of Orthopedic Surgery, NYU Langone Medical Center; Department of Medical Engineering, NYU Tandon School of Engineering, New York, NY, USA
Peter S. Walker, PhD, was educated in England at the Royal Grammar School, Newcastle, England, then at the University of Cambridge. After a 3-year engineering traineeship, he completed a PhD at the University of Leeds 1966-69 under Professors Dowson and Wright. Since then, he has been an active participant in the field of biomechanics of joints and the design of joint replacements, with a major emphasis on the knee. He has collaborated with surgeons and bioengineers at renowned institutions, including the Hospital for Special Surgery, Howmedica (Stryker), Brigham & Women’s Hospital, Royal National Orthopaedic Hospital, University College London, and currently at New York University Langone Orthopedic Hospital. He has co-authored over 300 articles with almost 12,000 citations. The basic research has contributed to innovative ideas for total knee design, while many of the test machines and methodologies have been emulated by other labs. Dr. Walker has been a co-designer of several successful total knee systems, the most notable being the Total Condylar, Graduated Knee System, Kinematic & Kinemax, Smiles Bone Tumor System, NexGen and Persona.

“This book is written for orthopedic surgeons, fellows, and residents but also for researchers, medical academics, and orthopedic company representatives. The needs of the intended audience are well met. … This is a very useful resource for the intended audience. Through a wonderfully iterated historical litany, readers gain a wider perspective of total knee replacement and are stimulated to investigate prosthetic design further. The book is unique in this regard. It is a recommended addition to medical libraries.” (Samuel J. Chmell, Doody’s Book Reviews, July 3, 2020)