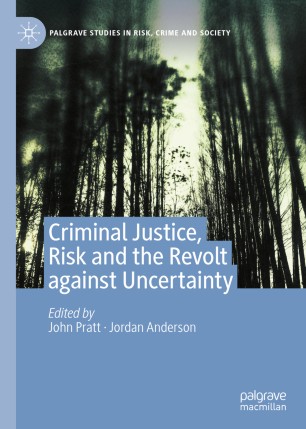 Criminal Justice, Risk and the Revolt against Uncertainty

This book examines the impact and implications of the relationship between risk and criminal justice in advanced liberal democracies, in the context of the ‘revolt against uncertainty’ which has underpinned the rise of populist politics across these societies in recent years. It asks what impact the demands for more certainty and security, and the insistence that national identity be reasserted, will have on criminal law and penal policy. Drawing upon contributions made at a symposium held at Victoria University of Wellington, New Zealand in November 2018, this edited collection also discusses the way in which risk has come to inform sentencing practices, broader criminal justice processes and the critical issues associated with this. It also examines the growth and making of new ‘risky populations’ and the harnessing of risk-prevention logics, techniques and mechanisms which have inflated the influence of risk on criminal justice.

John Pratt is Professor of Criminology at the Institute of Criminology, Victoria University of Wellington, New Zealand. His fields of research are comparative penology and the history and sociology of punishment. He has published in eleven languages and has been invited to lecture at universities in South America, North America, Europe, Asia and Australia. His books include Punishment and Civilization (2002), Penal Populism (2007) and Contrasts in Punishment (2013).
Jordan Anderson is currently completing her PhD in Criminology at the Institute of Criminology at Victoria University of Wellington, New Zealand. Her research focuses on risk and dangerousness in modern society, with particular attention to post-sentence regulation of sex offenders in New Zealand. Jordan’s research interests include risk, post-sentence regulation, sentencing, and youth justice.