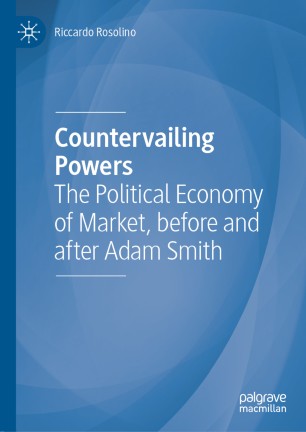 The Political Economy of Market, before and after Adam Smith

This book will trace the trajectory of the surprising idea that the victims of monopolistic conspiracies should be allowed to fight back using the same fraudulent and immoral weapons as the conspirators. In other words, if left to itself, the market will produce the antibodies necessary to survival, notwithstanding its most sinister pathology – the tendency of its principals to conclude private agreements behind the scenes.

Originally conceived in a moral context halfway through the 16th century, the idea was then taken over by the world of commercial law in exactly the form it had been employed theologically. Surprisingly, though, after doing the rounds for over a century, it then disappeared without trace.  This book will look at how Adam Smith revived and recharged the idea. He applied it in The Wealth of Nations (1776) to the conflict of interest between employers and workers in the attempt to break the stranglehold of the artificial compression of wages to minimum subsistence level. After Smith, the freshly revived idea went underground again for another half-century until, in the 1820s, it assumed a front-row position in the newborn liberal political economics. This book will look at how, in the framework of the debate over the repeal of the Combination Laws, the idea was dusted down and put back in the fight, having first been stripped it off its moral clothes and dressed instead in the new robes of economic pragmatism.

Riccardo Rosolino is Associate Professor of Modern History at the University of Naples  "L'Orientale",  Department of Human and Social Science, Italy.