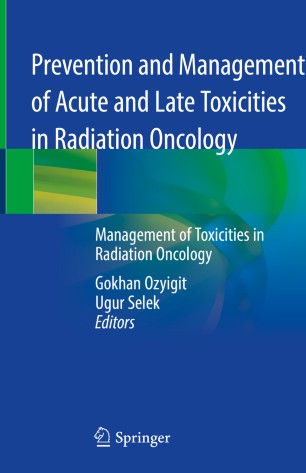 Prevention and Management of Acute and Late Toxicities in Radiation Oncology

Management of Toxicities in Radiation Oncology

This book is an evidence-based guide to the prevention and current management of acute and late toxicities of radiation therapy for a wide range of malignancies. Each chapter focuses on a particular anatomic site and provides information on normal sectional anatomy, contouring of target volumes and organs at risk, dose constraints, the pathophysiology of radiation toxicity, and treatment approaches for each potential toxicity. The information provided will assist in the planning and delivery of intensity-modulated radiation therapy, including volumetric modulated arc therapy, stereotactic radiosurgery, and stereotactic body radiotherapy. It will also enable the selection of appropriate, evidence-based management options in individual patients who experience radiation toxicities, taking into account the organ-specific pathophysiology of radiation injury. Written by acknowledged experts and featuring numerous high-quality illustrations, the book will be an ideal reference aid for practicing clinical and radiation oncologists, radiotherapists, fellows, residents, and nurses.