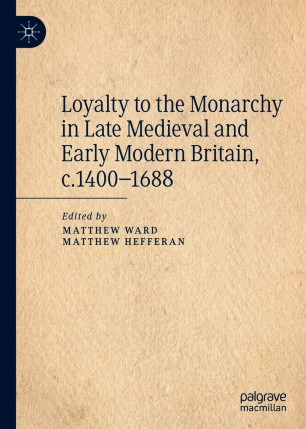 This book explores the place of loyalty in the relationship between the monarchy and their subjects in late medieval and early modern Britain. It focuses on a period in which political and religious upheaval tested the bonds of loyalty between ruler and ruled. The era also witnessed changes in how loyalty was developed and expressed. The first section focuses on royal propaganda and expressions of loyalty from the gentry and nobility under the Yorkist and early Tudor monarchs, as well as the fifteenth-century Scottish monarchy. The chapters illustrate late-medieval conceptions of loyalty, exploring how they manifested themselves and how they persisted and developed into early modernity. Loyalty to the later Tudors and early Stuarts is scrutinised in the second section, gauging the growing level of dissent in the build-up to the British Civil Wars of the seventeenth century. The final section dissects the role that the concept of loyalty played during and after the Civil Wars, looking at how divergent groups navigated this turbulent period and examining the ways in which loyalty could be used as a means of surviving the upheaval.

Matthew Ward is a British Academy Postdoctoral Research Fellow at the University of Nottingham, UK, and Fellow of the Royal Historical Society. He authored The Livery Collar in Late Medieval England and Wales: Politics, Identity and Affinity (2016), and is currently preparing his second monograph, The Culture of Loyalty in Fifteenth-Century England.

Matthew Hefferan is a Teaching Associate in Medieval and Early Modern History at the University of Nottingham, UK. His research focuses on the royal household knight in later medieval England. He is currently preparing a monograph on the household knights of King Edward III, to be published in 2021.