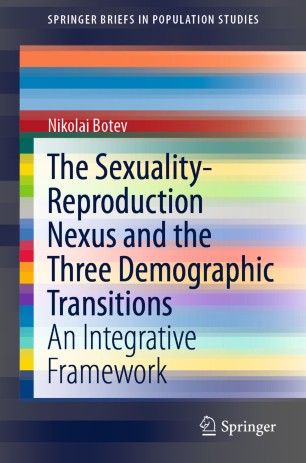 The Sexuality-Reproduction Nexus and the Three Demographic Transitions

This monograph outlines an integrative framework that conceptualizes the role of relations of control in human reproduction and long-term population dynamics.  It thereby draws on the demographic transition theory, sexuality studies, Foucault’s concept of bio-power and sexuality as key to social control, cognate concepts and theories, and on findings from demography, anthropology, archaeology and other disciplines.

The framework is based on the premise that four demographic regimes can be identified over the course of human history. They are defined by the primary locus and modus of control over reproduction. The framework questions some of the basic postulates in population studies, including how demographic transitions are interpreted.  As such this book contributes to the debate on the longer-term trends in population dynamics and the relations of power and control in human reproduction.

Nikolai Botev holds a PhD and MA in Demography from the University of Pennsylvania, USA and a degree in Labor Economics from the Higher Institute of Economics in Sofia, Bulgaria. He started his career in academia before moving on to work for the United Nations – initially as a research demographer with the UN Economic Commission for Europe (UNECE) and then in various positions of increasing responsibility with UNECE and UNFPA (the United Nations Population Fund). Among other things he has managed a project which resulted in a collection of internationally comparable census microdata samples for a number of European countries, and was Director of UNFPA’s office for Central Asia. His interests are in population and public policy, intermarriage and inter-group relations, population ageing and its social and economic implications, as well as historical demography and the theory of the demographic transition. He has published in journals like American Sociological Review, Population and Development Review, Population Studies, European Journal of Ageing, and have given lectures and talks in academic institutions on several continents.