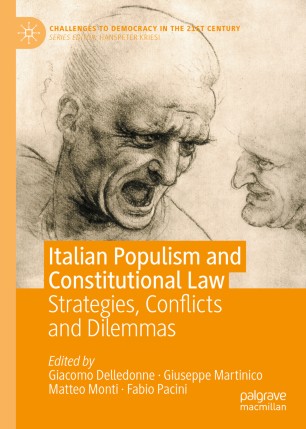 This edited volume explores the relationship between constitutionalism and populism in the Italian context. Italian populism is of interest to comparative lawyers for many reasons. Firstly, the country has a long-lasting tradition of anti-parliamentarism over the course of its history as a unitary state. After the 2018 general election, it has turned into the first European country in which two self-styled populist parties formed a coalition government. Although it collapsed in August 2019, many issues that it had raised remain. Secondly, as Italy is a founding member of the European Communities, the constitutional implications of populist politics have to be considered not only within the national framework but also in a wider context. This book argues that the relationship between populism and constitutionalism should not be seen in terms of mutual exclusion and perfect opposition. Indeed, populism frequently relies on concepts and categories belonging to the language of constitutionalism (majority, democracy, people), offering a kind of constitutional counter-narrative.
Giacomo Delledonne is Research Fellow in Comparative Public Law at the Scuola Superiore Sant'Anna, Pisa, Italy.
Giuseppe Martinico is Associate Professor of Comparative Public law at the Scuola Superiore Sant'Anna, Pisa, Italy.
Matteo Monti is a researcher in the Faculty of Law at the Scuola Superiore Sant'Anna, Pisa, Italy.
Fabio Pacini is Research Fellow in Constitutional Law at the Scuola Superiore Sant'Anna, Pisa, Italy.