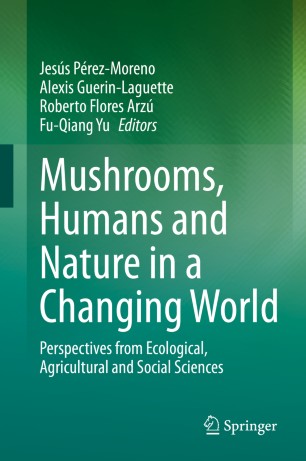 Mushrooms, Humans and Nature in a Changing World

This book focuses on recent advances in our understanding of wild edible mycorrhizal fungi, truffle and mushrooms and their cultivation. In addition to providing fresh insights into various topics, e.g. taxonomy, ecology, cultivation and environmental impact, it also demonstrates the clear but fragile link between wild edible mushrooms and human societies. Comprising 17 chapters written by 41 experts from 13 countries on four continents, it enables readers to grasp the importance of protecting this unique, invaluable, renewable resource in the context of climate change and unprecedented biodiversity loss.
The book inspires professionals and encourages young researchers to enter this field to develop the sustainable use of wild edible mushrooms using modern tools and approaches. It also highlights the importance of protecting forested environments, saving species from extinction and generating a significant income for local populations, while keeping alive and renewing the link between humans and wild edible mushrooms so that in the future, the sustainable farming and use of edible mycorrhizal mushrooms will play a predominant role in the management and preservation of forested lands.

Jesus Pérez Moreno is a Professor at Colegio de Postgraduados, Mexico, with a PhD from the University of Sheffield, England. He has delivered lectures in Canada, China, Colombia, Ecuador, England, France, Guatemala, Japan, Mexico, Morocco, New Zealand, Spain, Thailand and Sri Lanka; his articles have been cited 2,700 times by researchers from 55 countries. Author of 15 books and 23 book chapters; supervisor of 50 MSc and PhDs and invited Professor at the University of Sheffield and at the Kunming Institute of Botany, Chinese Academy of Sciences (CAS). He has studied during 30 years the relationship between mushrooms and humans focusing on sustainable development, poverty alleviation, food security and mitigation of climate change.
Alexis Guerin-Laguette is a Senior Scientist at The New Zealand Institute for Plant & Food Research Ltd focusing on edible mycorrhizal fungi (EMF). He has worked in France, Japan and Canada. His passion for EMF stems from his PhD on Lactarius deliciosus and postdoc on Tricholoma matsutake. In New Zealand, he extended his activities to truffles. He is the Technical Representative for the NZ Truffle Association and since 2015, has collaborated with the Kunming Institute of Botany, CAS. He has authored over 20 peer-reviewed articles and book chapters. He is the Secretary of the International Workshop on Edible Mycorrhizal Mushrooms.
Roberto Flores Arzú is a Professor at the Universidad de San Carlos, Guatemala with a PhD from the University of Murcia, Spain. He has been a visiting scholar at IRTA in Barcelona; Universities of Tlaxcala, Mexico; Bologna, Pavia, and Cagliari in Italy.  He has published papers on the macrofungi of Guatemala and the description and synthesis of ectomycorrhizae of Neotropical trees. His current research, in collaboration with scientists from China, Italy, Mexico and Japan, focuses on macrofungal taxonomy, ectomycorrhizae and ethnomycology.
Yu Fu-Qiang is an Associate Professor and Director of the General Office at the Kunming Institute of Botany, CAS. He was a visiting scholar at the Department of Botany, Chicago. His research focuses on the diversity, management and cultivation of hypogeous fungi and highly-prized ectomycorrhizal fungi, and he leads a group hosting scholars from New Zealand, Japan, United States, Mexico and Spain. He has published over 20 papers and authored 4 patents on the cultivation and management of high-prized mushrooms.