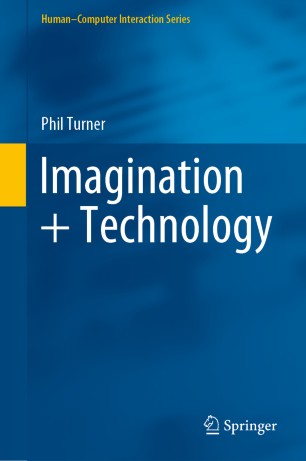 Imagination is highly valued and sought-after, yet elusive and ill-defined. Definitions range from narrowly cognitive accounts to those which endow imagination with world-making powers. Imagination underpins our ability to speculate about the future and to re-experience the past. The everyday functioning of society relies on being able to imagine the perspectives of others; and our sense of who we are depends on the stories our imaginations create. Our soaring imaginations have taken us to the moon and allowed Einstein to race a light beam. Unsurprisingly, imagination underlies every aspect of human-computer interaction, from the earliest conceptual sketches, through the realistic possibilities portrayed variously in well-known tools as scenarios and storyboards, through to the wilder shores of design fictions. Yet, curiously, imagination is very rarely addressed directly in the design and HCI literature (and is wholly missing from virtual reality).

This book addresses this gap in our accounts of how we imagine, conceptualise, design and use digital technologies. Drawing on many years of practical and academic experience in human computer-interaction, together with a wide range of material from psychology, design, cognitive science and HCI, seasoned with a little philosophy and anthropology, Imagination + Technology first considers imagination itself and the principal farthings of a new account. Later chapters discuss the role of imagination in the design, aesthetics, use and experience of digital technologies before the concluding chapter focusses on the provocative nature of imagination. The book will be stimulating reading for anyone working in the field of interactive technology and related areas, whether academics, students or practitioners.