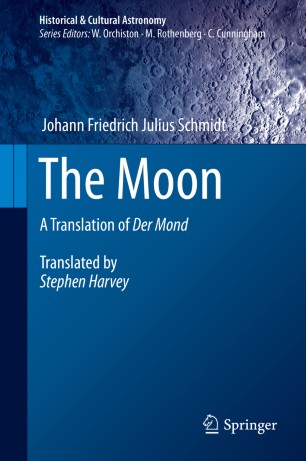 A Translation of Der Mond

Julius Schmidt was one of the finest astronomical observers of his time, and his detailed map of the Moon surpassed anything that had come before. Today, the German astronomer and geophysicist has remained a largely neglected figure, despite being one of the most important players in the history of lunar studies.

This book at last makes accessible Schmidt’s highly regarded German work, Der Mond. Considered an astronomical classic of the nineteenth century, Der Mond remained without a proper English counterpart for the last century and a half, until now. The author’s faithful English translation provides readers with much-needed access into Schmidt’s original publication, with the aim of showing the community just how vital his work and legacy have been in the international field of selenography.

Steve Harvey has worked in the Computing Industry for over 25 years, for companies such as BAE, Thales, EADS and McLaren. He is a professional member of the British Computer Society and has lived and worked for seven years in Germany. Harvey, a Fellow of the Royal Astronomical Society, is also a member of many national astronomy groups, including SPA, BAA, BIS and the Planetary Society. He sits on the Council for the British Astronomical Association and currently holds the position of the Computing Section Director. Within this role, he edits and produces the yearly Handbook, an internationally renowned Almanac dating back to 1920.

“Stephen Harvey has done an excellent job at translating Schmidt’s most famous publication, and so the book should be of great value to astronomical historians and amateur astronomers interested in the Moon who wish to own this work, but cannot decipher the original in German.” (Anthony Cook, The Observatory, Vol. 141 (1281), April, 2021)