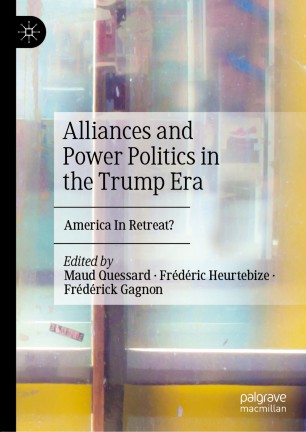 Alliances and Power Politics in the Trump Era

This volume examines the evolution of US foreign policy since Donald Trump’s accession to the presidency and the strategic challenges confronting the United States in a changing geopolitical environment. Trump has delivered on his promises to break with past policies and this has, for the most part, revealed a policy of retrenchment that has jeopardized US alliances. The book focuses on the current state and future of transatlantic relations, on Washington’s policy in the Middle East and Africa, on the administration’s use of the economic weapon in international relations, but also on the American response to the return of great power competition in the face of an assertive China and resurgent Russia. The contributions gather the inputs of a transatlantic community of scholars combining academics, think-tank fellows, former policy-makers and administration officials from both sides of the Atlantic.

Maud Quessard is Associate Professor of US Foreign Policy and Senior Research Fellow at the Institute for Strategic Research at the Paris Military School (IRSEM), France.

Maud Quessard is Associate Professor of US Foreign Policy and Senior Research Fellow at the Institute for Strategic Research at the Paris Military School (IRSEM), France.
Frédéric Heurtebize is Associate Professor of US History and Politics at the University of Paris Nanterre, France.
Frédérick Gagnon is Professor, holder of the Raoul Dandurand Chair in Strategic and Diplomatic Studies, and Director of the Center for United States Studies at the University of Québec, Canada.

“One might think that a book entitled Alliances and Power Politics in the Trump Era: America in Retreat? is just another ‘let’s beat up on President Trump because he breaks with long-established traditions, practices, and policies in American foreign policy’ book. It’s much more than that. The entries in this edited volume situate President Trump’s foreign policy initiatives into the broader context of a changing international system structure, thus suggesting that some of these policy shifts could have arisen anyway due to the evolving nature of international threats and opportunities. The result is a more comprehensive and balanced assessment of President Trump’s foreign policy agenda and approach. Alliances and Power Politics in the Trump Era is a welcome addition to the literature of US foreign policy in the 21st century, sure to be widely cited in the future.”

“This is an original and comprehensive volume that addresses Trump’s foreign policy transformations and the strategic challenges facing the United States and its allies, notably in Europe and the Middle East. A must-read.”

“This co-edited volume, which contains chapters from a host of distinguished scholars from several countries, is a formidable piece of research and analysis. It ranges across the globe to assess the consequences of President Donald Trump's foreign policies in every continent.  It relies on the appropriate secondary sources but, more importantly, on a wide range of primary sources. It addresses such issues as the Russian Republic's cyberstrategy, the American trade war with China, Franco-American security cooperation in sub-Saharan Africa, the use of tariffs and economic sanctions against a variety of countries, etc. This is merely to scratch the surface of this comprehensive, in-depth analysis of the causes and consequences of the foreign security and economic policies of the Trump administration. Everyone interested in exploring this multifaceted topic should obtain this book.”