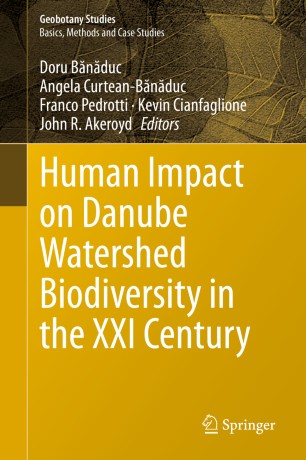 Human Impact on Danube Watershed Biodiversity in the XXI Century

The second-longest European river after the Volga, the Danube is one of the world’s most important rivers in terms of its geographical and historical significance. In recent history, it has served as a major international waterway and numerous cities, including four capitals, have been founded on its banks. The 2826km-long Danube has a watershed measuring 801,093 km2 that is now shared between 19 countries, from its source in the Black Forest to the Black Sea, into which it pumps an average of 827 km3 of water a year.

This book describes and explains key landscape values interactions (geographical, cultural and natural heritage). It also identifies the threats and various types of human impact affecting this system in all the countries of the Danube River Basin, based on the investigations and perspectives of a team of experienced naturalists, and in the context of the early 21st century, in which the human-nature relationship is still far from balanced. These studies demonstrate how biodiversity, conservation and ecological studies can help us successfully promote mutual cooperation and combine our efforts to address problems as a responsible continent.

Doru Bănăduc holds a BSc in Ecology (1995) from the Ecological University of Bucharest, Romania, PhD in Biology (2003) from the Romanian Academy Institute of Biology. She was awarded a postdoctoral degree in Bio-economy and Eco-economy from the Romanian Academy National Institute of Economy "Costin C. Kiriţescu" in 2012. She is a researcher, manager, lecturer and Associate Professor of Ecology at "Grigore Antipa" Natural History National Museum Bucharest, Natural History Museum of Sibiu, Broward College, USA, and Lucian Blaga University of Sibiu, Romania. She has been involved in over 50 national and international projects and has published 7 books, 30 book chapters and 130 scientific papers. She is the editor of five scientific journal series and 3 books.

Angela Bănăduc received her BSc in Ecology and Environment Protection in 1995 from "Lucian Blaga" University of Sibiu, PhD in Biology in 2002 from "Ovidius" University of Constanţa, Romania, and postdoctoral degree in Bio-economy and Eco-economy in 2012 from the Romanian Academy National Institute of Economy "Costin C. Kiriţescu". She is an Associate Professor of Ecology, and a researcher, lecturer in ecology and related fields, as well as head of department, head of laboratory, scientific secretary and dean at Lucian Blaga University of Sibiu. She has been involved in over 50 national and international projects, and has published 9 books, 20 book chapters and 120 scientific papers (Ecology and Hydrobiology). She is the editor of four scientific journal series and 5 books.

John R. Akeroyd holds a BSc from University of St Andrews, a PhD from Cambridge, and has held fellowships at Dublin and then Reading, where he prepared the 2nd edition of Flora Europaea volume 1. For 30 years he has been an independent scholar, consultant, editor and writer, and was co-founder and editor of the global conservation magazine Plant Talk. He is author or editor of fifteen books, most recently Docks and Knotweeds of Britain and Ireland (2014). Since 2004 he has been a botanical consultant to Fundaţia ADEPT, an Anglo-Romanian NGO supporting farming and biodiversity conservation in the Saxon Villages of Transylvania.