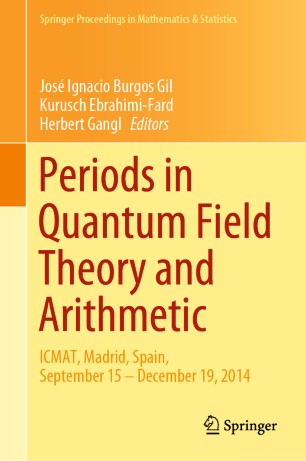 This book is the outcome of research initiatives formed during the special "Research Trimester on Multiple Zeta Values, Multiple Polylogarithms, and Quantum Field Theory'' at the ICMAT (Instituto de Ciencias Matemáticas, Madrid) in 2014. The activity was aimed at understanding and deepening recent developments where Feynman and string amplitudes on the one hand, and periods and multiple zeta values on the other, have been at the heart of lively and fruitful interactions between theoretical physics and number theory over the past few decades.

In this book, the reader will find research papers as well as survey articles, including open problems, on the interface between number theory, quantum field theory and string theory, written by leading experts in the respective fields. Topics include, among others, elliptic periods viewed from both a mathematical and a physical standpoint; further relations between periods and high energy physics, including cluster algebras and renormalisation theory; multiple Eisenstein series and q-analogues of multiple zeta values (also in connection with renormalisation); double shuffle and duality relations; alternative presentations of multiple zeta values using Ecalle's theory of moulds and arborification; a distribution formula for generalised complex and l-adic polylogarithms; Galois action on knots. Given its scope, the book offers a valuable resource for researchers and graduate students interested in topics related to both quantum field theory, in particular, scattering amplitudes, and number theory.

José Ignacio Burgos Gil is a Spanish mathematician working in Arithmetic Geometry, and focusing on Arakelov theory and the theory of periods. He completed his Ph.D. at the University of Barcelona and is currently a researcher at the ICMAT (Instituto de Ciencias Matematicas), Madrid. With more than 50 scientific papers to his credit, he regularly lectures at institutes and conferences around the world and is a member of the Academia Europaea.

Kurusch Ebrahimi-Fard is a German mathematician working as an associate professor of mathematics at the Department of Mathematical Sciences, Norwegian University of Science and Technology (NTNU) in Trondheim, Norway. After receiving his Ph.D. in theoretical physics from Bonn University in Germany, he has held postdoctoral positions at e.g. the IHES (Bures-sur-Yvette, France), Max Planck Institute for Mathematics (Bonn, Germany), and the Instituto de Ciencias Matematicas (Madrid, Spain).

Herbert Gangl is a German mathematician working on polylogarithms and explicit algebraic K-theory, and an associate professor of pure mathematics at Durham University, UK. After completing his Ph.D. at Bonn University, he spent most of his pre-tenure career at the Max Planck Institute for Mathematics, also in Bonn, complemented by a long-term stay at the Institute for Experimental Mathematics in Essen and a substituting professorship at the University of Siegen, both Germany, and as an assistant at Kyushu University in Fukuoka, Japan. He is also a passionate designer of 3D printed geometric jewellery.