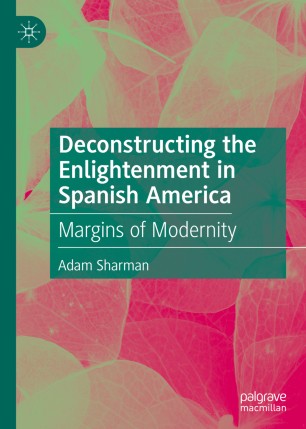 Deconstructing the Enlightenment in Spanish America

“With his customary rigorous scholarship and theoretical awareness, Adam Sharman has produced a challenging and thought-provoking reassessment of Spanish America's colonial Enlightenment. This is a timely and engaging intervention – an essential re-reading of traditional notions of the Spanish American experience.” – Prof. Philip Swanson, Hughes Professor of Spanish, University of Sheffield


“This book’s original conclusions open up a new perspective on the Spanish American Enlightenment. Sharman demonstrates a rounded approach to an overlooked subject, exploring with equal ease and eloquence geodesic findings and legal intricacies. It is a memorable contribution to the field.” – Dr. Victoria Carpenter, Head of Research Development, University of Bedfordshire

This book is about Enlightenment culture in Spanish America before Independence—there where, according to Hegel, one would least expect to find it. It explores texts from five cultural fields (science, history, the periodical press, law, and literature), including the journals of the geodesic expedition to Quito, philosophical histories of the Americas, a year’s work from the Mercurio Peruano, the writings of Mariano Moreno, and Lizardi’s El periquillo sarniento. Each chapter takes one field, one body of writing, and one key question: Is modern science universal? Can one disavow the discourse of progress? What is a “Catholic” Enlightenment? Are Enlightenment reason and sovereignty monological? Must the individual be the normative subject of modernity? The above texts, the book contends, illuminate not only the contradictions of a marginalised colonial American Ilustración, but the constitutive aporias of the modern project itself.

Drawing on work by Derrida, but also on historical and philosophical accounts of the various Enlightenments, this incisive book will be of interest to students of Spanish America and scholars in the fields of postcolonialism and the Enlightenment.

Adam Sharman is Associate Professor in the Department of Modern Languages and Cultures at the University of Nottingham, UK. His books include Tradition and Modernity in Spanish American Literature, Otherwise Engaged: After Hegel and the Philosophy of History, and the co-edited 1812 Echoes: The Cadiz Constitution in Hispanic History, Culture and Politics.