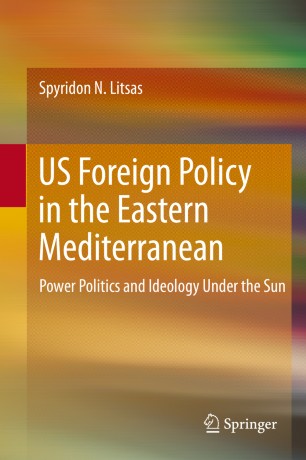 Power Politics and Ideology Under the Sun

This book examines US foreign policy in the Eastern Mediterranean and the region’s key role in the practice and evolution of American exceptionalism. The political developments in the Eastern Mediterranean during the 19th and the first half of the 20th centuries, gave to the US opportunities to express, in the most explicit way, its anti-colonialism, the fervent support of open and democratic societies, and its willingness to openly confront tyranny and oppression whenever this was possible (or necessary) for American interests. Since that time, the region has been a testing ground for the core elements of American foreign policy deployed worldwide.

The monograph shows the contributions of the United States during critical moments in the region, such as the First Barbary War (1801-1805), the introduction of Truman Doctrine, Washington’s role in the Suez Crisis, the Greek junta and the Imia Crisis of 1996. It also scrutinizes the different levels of the economic, military and diplomatic challenges which China, Russia and Turkey present today, while it also covers the American approach to the Arab Spring. From a ‘Shining City on a Hill’ to the current ‘Make America Great Again’ mottoes, this critique follows American Foreign Policy in the Eastern Mediterranean and the strong bonds that the nation established with the geostrategic, political and ideological features of the region. The pace of recent events, and the increasing complexity of this global corner, prove a challenge to America today; the future and clarion call that hard work and the finest ingenuity are necessary to keep its regional hegemony, and its course toward increased prosperity. This work’s goal is to inspire the conversations by academics, diplomats, leaders (both political and military) and most of all businessmen, to this end.

Spyridon N. Litsas is Professor of International Relations at the University of Macedonia in Thessaloniki, Greece. He is also a Visiting Professor of International Relations and Eastern Mediterranean Politics at the Institut d’ etudes politiques de Grenoble (SciencesPo at the University of Grenoble) and a Visiting Professor of International Relations and Strategic Analysis at the Joint Supreme College of War of the Hellenic Armed Forces. He is teaching, researching and publishing on War Theory, Strategic Analysis, Jihadism, Politics of the Eastern Mediterranean, Middle East and North Africa, US & Russian Foreign Policy in South-Eastern Europe, Turkish Foreign Policy, EU Politics. His most recent publications include: ‘Stateness and Sovereign Debt: Greece in the European Conundrum’ (with Konstantinos Lavdas & Dimitrios Skiadas), ‘The Eastern Mediterranean in Transition: Multipolarity, Politics and Power’ (eds. with Aristotle Tziampiris), ‘Foreign Policy Under Austerity: Greece’s Return to Normality?’ (eds. with Aristotle Tziampiris). ‘The New Eastern Mediterranean: Theory, Politics and States in a Volatile Era’ (eds. With Aristotle Tziampiris).