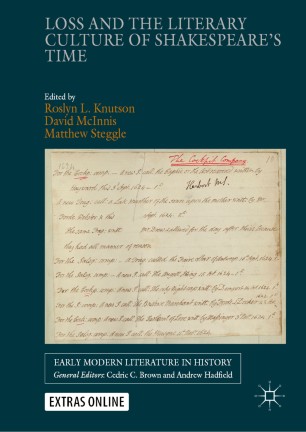 Loss and the Literary Culture of Shakespeare’s Time

As early modernists with an interest in the literary culture of Shakespeare’s time, we work in a field that contains many significant losses: of texts, of contextual information, of other forms of cultural activity. No account of early modern literary culture is complete without acknowledgment of these lacunae, and although lost drama has become a topic of increasing interest in Shakespeare studies, it is important to recognize that loss is not restricted to play-texts alone. Loss and the Literary Culture of Shakespeare’s Time broadens the scope of the scholarly conversation about loss beyond drama and beyond London. It aims to develop further models and techniques for thinking about lost plays, but also of other kinds of lost early modern works, and even lost persons associated with literary and theatrical circles. Chapters examine textual corruption, oral preservation, quantitative analysis, translation, and experiments in “verbatim theater”, plus much more.

Roslyn L. Knutson, Professor Emerita at the University of Arkansas at Little Rock, is the author of The Repertory of Shakespeare's Company, 1594-1613 (U of Ark P 1991), author of Playing Companies and Commerce in Shakespeare’s Time (CUP 2001), and co-editor with Kirk Melnikoff of Christopher Marlowe, Theatrical Commerce, and the Book Trade (CUP 2018). With David McInnis and Matthew Steggle, she is founder and co-editor of the Lost Plays Database.
David McInnis (University of Melbourne) is author of Mind-Travelling and Voyage Drama in Early Modern England (Palgrave, 2013), co-editor (with Claire Jowitt) of Travel and Drama in Early Modern England: The Journeying Play (Cambridge UP, 2018), and editor of Dekker’s Old Fortunatus for the Revels Plays series (Manchester UP, 2019). With Matthew Steggle, he edited Lost Plays in Shakespeare’s England (Palgrave, 2014). With Roslyn L. Knutson and Matthew Steggle, he is founder and co-editor of the Lost Plays Database.
Matthew Steggle is Professor of Early Modern English Literature at the University of Bristol. His publications include editions of early modern plays for Richard Brome Online (2010); The Cambridge Works of Ben Jonson (2012); and The Norton Shakespeare, 3rd edition (2015). His most recent book is Digital Humanities and the Lost Drama of Early Modern England: Ten Case Studies (2015). With Martin Butler, he is co-editor of the forthcoming Oxford Works of John Marston (forthcoming, 2021) for which he is editing Jack Drum’s Entertainment, and he is co-editor, with Roslyn L. Knutson and David McInnis, of the Lost Plays Database.