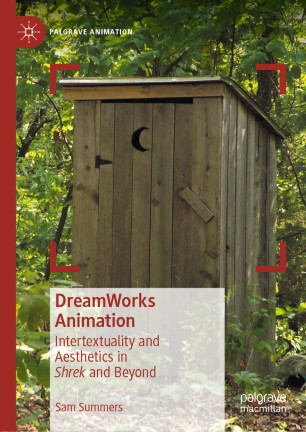 Intertextuality and Aesthetics in Shrek and Beyond

DreamWorks is one of the biggest names in modern computer-animation: a studio whose commercial success and impact on the medium rivals that of Pixar, and yet has received far less critical attention. The book will historicise DreamWorks’ contribution to feature animation, while presenting a critical history of the form in the new millennium. It will look beyond the films’ visual aesthetics to assess DreamWorks’ influence on the narrative and tonal qualities which have come to define contemporary animated features, including their use of comedy, genre, music, stars, and intertextuality. It makes original interventions in the fields of film and animation studies by discussing each of these techniques in a uniquely animated context, with case studies from Shrek, Antz, Kung Fu Panda, Madagascar, Shark Tale, Bee Movie, Trolls and many others. It also looks at the unusual online afterlife of these films, and the ways in which they have been reappropriated and remixed by subversive online communities.

Sam Summers lectures in animation history and theory at Middlesex University, UK, specialising in computer animation, aesthetics, intertextuality and the Hollywood animation industry. As well as publishing several articles and book chapters on these topics, he is the co-editor of Toy Story: How Pixar Reinvented the Animated Feature (2018).

“Summers offers a fascinating and detailed breakdown of what he sees as a primary characteristic of Dreamworks films, such as comedy, music, celebrity voice actors, or satire/pastiche … using a mix of animation/cultural studies references — Paul Wells, Maureen Furniss, Umberto Eco — along with a litany of examples from assorted Dreamworks films” (Chris Robinson, Artistic Director of the Ottawa International Animation Festival and author of Ballad of a Thin Man: In Search of Ryan Larkin (2008), and Japanese Animation: Time Out of Mind (2010))
Buy options