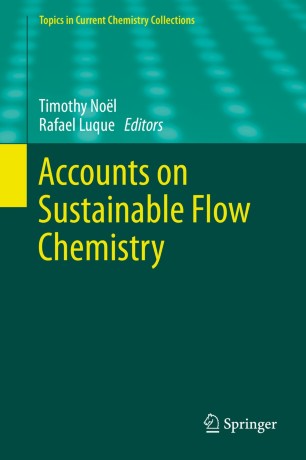 The series Topics in Current Chemistry Collections presents critical reviews from the journal Topics in Current Chemistry organized in topical volumes. The scope of coverage is all areas of chemical science including the interfaces with related disciplines such as biology, medicine and materials science. The goal of each thematic volume is to give the non-specialist reader, whether in academia or industry, a comprehensive insight into an area where new research is emerging which is of interest to a larger scientific audience.
Each review within the volume critically surveys one aspect of that topic and places it within the context of the volume as a whole. The most significant developments of the last 5 to 10 years are presented using selected examples to illustrate the principles discussed. The coverage is not intended to be an exhaustive summary of the field or include large quantities of data, but should rather be conceptual, concentrating on the methodological thinking that will allow the non-specialist reader to understand the information presented. Contributions also offer an outlook on potential future developments in the field.

Timothy Noël, born 1982 in Aalst (Belgium), received in 2004 his MSc degree (Industrial Chemical Engineering) from the KaHo Sint-Lieven in Ghent. He then moved to Ghent University to obtain a PhD at the Laboratory for Organic and Bioorganic Synthesis under the supervision of Professor Johan Van der Eycken (2005-2009). The title of his PhD manuscript is “Synthesis and application of chiral dienes and chiral imidates for asymmetric transition metal catalysis”. Next, he moved to Massachusetts Institute of Technology (MIT) as a Fulbright Postdoctoral Fellow with Professor Stephen L. Buchwald. At MIT, he worked on the development of new continuous-flow methods for cross-coupling chemistry at the MIT-Novartis Center for Continuous Manufacturing. In 2011, he accepted a position as an assistant professor in the research group of Professor Volker Hessel at Eindhoven University of Technology. His research interest are flow chemistry, homogeneous and heterogeneous catalysis and organic synthesis.

He received in 2011 the Incentive Award for Young Researchers from the Comité de Gestion du Bulletin des Sociétés Chimiques Belges, in 2012 a VENI award from NWO and he was also finalist of the European Young Chemist Award 2012. In 2013, he received a Marie Curie Career Integration Grant from the European Union. Since 2015, he coordinates the Marie Skłodowska-Curie ETN program “Photo4Future” on the development of photoredox catalysis in photomicroreactors (www.photo4future.com). In 2015, he obtained a prestigious VIDI award from NWO. And in 2016, he received the Thieme Chemistry Journal Award. He serves as an associate editor for Journal of Flow Chemistry.

Rafael Luque is Deputy Head of Department from Dpt. Quimica Organica at Universidad de Cordoba, where he graduated in 2005. Prof. Luque has a significant experience on biomass and waste valorisation practises to materials, fuels and chemicals as well as nanoscale chemistry and green engineering, with over 270 published research articles, 3 patent applications and 8 edited books as well as numerous contributions to book chapters and invited, guest, keynote and plenary lectures in scientific events worldwide. Among recent awards, Rafael received the Marie Curie Prize from Instituto Andaluz de Quimica Fina in Spain (2011), the Green Talents award from the Federal Ministry of Education and Research in Germany (2011), the TR35 Spain from Technology Review and MIT as one of the top 10 young entrepreneurs in Spain (2012) the RSC Environment, Sustainability and Energy Early Career Award (2013) from the Royal Society of Chemistry UK and the 2015 Lu Jiaxi lectureship from the College of Chemistry and Engineering in Xiamen University (China).