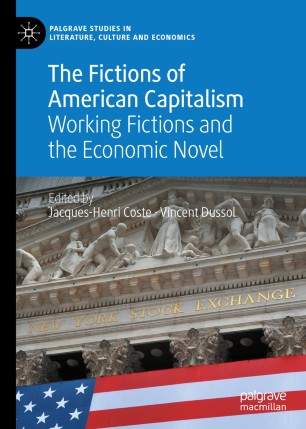 The Fictions of American Capitalism

Working Fictions and the Economic Novel

Part of the Palgrave Studies in Literature, Culture and Economics book series (PSLCE)

The Fictions of American Capitalism introduces a new way of thinking about fiction in connection with capitalism, especially American capitalism. These essays demonstrate how fiction fulfills a major function of the American capitalist engine, presenting various formulations of American capitalism from the perspective of economists, social scientists, and literary critics. Focusing on three narratives—fictitious capital, working fictions, and the economic novel—the volume questions whether these three types of fiction can be linked under the sign of capitalism. This collection seeks to illustrate the American economy’s dependence on fictitiousness, America’s ideological fictions, and the nation’s creative literary fiction. In relation to what the credit and banking crisis of 2007–2008 exposed about the “unreal” base of the economy, the volume concludes with a call to recognize the economic humanities, arguing that American fiction and American literary studies can provide a useful mirror for economists.

Jacques-Henri Coste is Associate Professor of American Studies and Political Economy at Université Sorbonne Nouvelle – Paris 3, France. He is editor of Les sociétés entrepreneuriales et les mondes Anglophones (2013) and coeditor of The Crisis and Renewal of American Capitalism (2016).

Vincent Dussol is Associate Professor of American Literature at Université Paul Valéry – Montpellier 3, France. He has translated several American poets and is the editor of The Epic Expands (2012) and co-editor of Poésie-traduction-cinéma/Poetry-translation-film (2019).