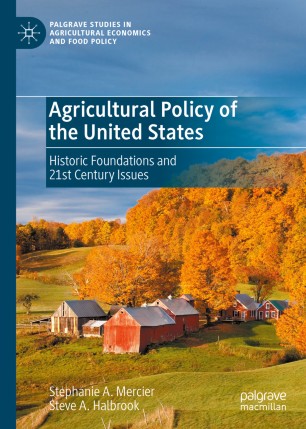 The book is organized into three sections.  Section one introduces the main themes of the book, explores the pre-Columbian period and early European settlement, and traces the first 150 years of U.S. agricultural policy starting with the post revolution period and ending with the “golden age” of agriculture in the early 20th century.  Section two outlines that grand bargain of the 1930s that initiated the modern era of government intervention into agricultural markets and traces this policy evolution to the early days of the 21st century.  The third section provides an in-depth examination of six policy issues that dominate current policy discussions and will impact policy decisions for the next generation: trade, environment/conservation, commodity checkoff programs, crop insurance, biofuels, and domestic nutrition programs.

Stephanie A. Mercier is Senior Policy Adviser at the Farm Journal Foundation, USA.  From 1997 to 2011, she served as a chief economist for the Democratic staff of the Senate Agriculture Committee. Previously, she served as team leader for the Trade Policy and Programs area of the Economic Research Service of the U.S. Department of Agriculture. In her nine years at ERS, she worked on both domestic commodity programs and trade policy issues. On the Hill, she covered a wide variety of issues for the Committee, among them domestic farm programs, climate change, risk management policy, international agricultural trade, agricultural development, and food aid policy.

Steve A. Halbrook is a recently retired Professor of Agricultural Economics and Agribusiness at the University of Arkansas. Dr. Halbrook spent most of his career in government, private industry and the not-for-profit world, at the Board of Governors of the Federal Reserve System, United States Department of Agriculture, National Dairy Promotion and Research Board and Farm Foundation. In private law practice, he represented numerous dairy cooperatives in the Midwest. In all of these roles he worked with stakeholders, public officials and social scientists across the country to find innovative ways to address issues of importance to agriculture and rural communities.

“In this book, Mercier and Halbrook provide an insiders’ view of the agricultural policy-making process, including viewpoints that will be historically important.” (James L. Novak, Professor Emeritus of Agricultural Economics and Rural Sociology, Auburn University)

“As a member of the House or Senate Agriculture Committees for 40 years, and Chairman of the Senate Agriculture Committee for two recent Farm Bills, I found this book to be both an enlightening and enjoyable read. The authors bring their years of being on the inside of agricultural policy development and implementation to life through their insightful writing.” (Tom Harkin, Former Senator, D-Iowa)