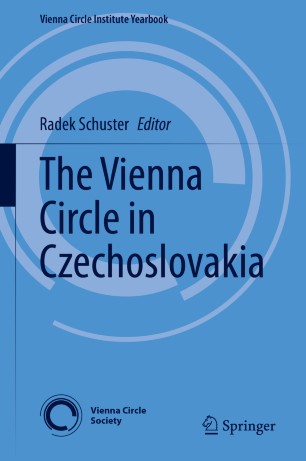 The Vienna Circle in Czechoslovakia

This book explores the remarkable interconnections of the Czechoslovak environment and the work and legacy of the Vienna Circle on the philosophical, scientific and artistic level. The Czech lands and later Czechoslovakia were the living and working space for the predecessors and catalysts for Logical Empiricism, such as Bernard Bolzano, Ernst Mach and Albert Einstein, along with key figures in the Vienna Circle such as Philipp Frank and Rudolf Carnap. Moreover, Prague hosted important academic events in which Logical Empiricism was presented to the public, such as the September 1929 1st Conference on the Epistemology of the Exact Sciences, which launched the key manifesto, The Vienna Circle. The Scientific Conception of the World. In addition, this book investigates both the positive and negative receptions of Logical Empiricism within Czech and Slovak intellectual circles. The volume features a selection of contributions to the international conference, The Vienna Circle in Czechoslovakia, held in Pilsen, Czech Republic, in February 2015. These essays are supplemented by two texts of vivid personal memoirs by Nina Holton and Ladislav Tondl. The book is of interest to scholars and researchers interested in the history of philosophy and science in central Europe and the philosophy of science and the Logical Empiricism of the Vienna Circle.

Radek Schuster is an assistant professor and the deputy head in the Department of Philosophy of the Faculty of Arts at the University of West Bohemia in Pilsen. He focuses on the philosophy and history of science, chiefly the legacy of the Vienna Circle; analytic philosophy and philosophy of language, mainly the work of Wittgenstein; and philosophy of technology, particularly artificial intelligence and human-computer interaction. In these three fields of study, respectively, he has conducted his research as a visiting scholar at the University of Vienna / the Institute Vienna Circle (AKTION: 5/2011, 5/2016 and 4–9/2017); the University of Bergen / the Wittgenstein Archives (Norway Grants: 9/2015 and 6/2016); and Indiana University / the School of Informatics, Computing, and Engineering (Fulbright: 9/2016–2/2017). His hobbies include paradoxes and illusions of all kinds.