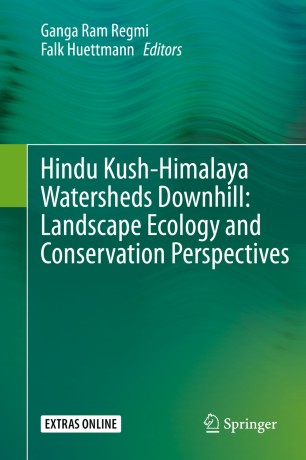 This book describes the myriad components of the Hindu Kush-Himalaya (HKH) region. The contributors elaborate on challenges, failures, and successes in efforts to conserve the HKH, its indigenous plants and animals, and the watershed that runs from the very roof of the planet via world-rivers to marine estuaries, supporting a human population of some two billion people. Readers will learn how the landforms, animal species and humans of this globally fascinating region are connected, and understand why runoff from snow and ice in the world’s tallest mountains is vital to inhabitants far downstream.

The book comprises forty-five chapters organized in five parts. The first section, Landscapes, introduces the mountainous watersheds of the HKH, its weather systems, forests, and the 18 major rivers whose headwaters are here. The second part explores concepts, cultures, and religions, including ethnobiology and indigenous regimes, two thousand years of religious tradition, and the history of scientific and research expeditions. Part Three discusses policy, wildlife conservation management, habitat and biodiversity data, as well as the interaction of animals and humans. The fourth part examines the consequences of development and globalization, from hydrodams, to roads and railroads, to poaching and illegal wildlife trade. This section includes studies of animal species including river dolphins, woodpeckers and hornbills, langurs, snow leopards and more. The concluding section offers perspectives and templates for conservation, sustainability and stability in the HKH, including citizen-science projects and a future challenged by climate change, growing human population, and global conservation decay.

This work is written for scholars, landscape ecologists, naturalists and researchers alike, and it can be especially well-suited for those readers who want to learn in a more holistic fashion about the latest conservation issues.

Falk spent over 10 years doing field work and research analysis -including a sabbatical- at the 3rd pole: the Hindu Kush-Himalaya region. He is a ‘digital naturalist’ linking computing, open access data and the internet with natural history research for global conservation and sustainability. Working as a professor for Wildlife Ecology with the University of Alaska Fairbanks (UAF) he and many  international students run the -EWHALE lab-. In his lab he pursues biodiversity, land- and seascape approaches, the atmosphere, global governance, ecological economics, diseases and new approaches to global sustainability on a pixel-scale in a transparent and repeatable way. Most of his 220 publications and 8 books are centered on Open Access and Open Source, Geographic Information Systems (GIS) software, Metadata, and Data Mining/Machine Learning pushing real-world conservation questions forward.
Ganga has 15 years’ experiences in wildlife survey, monitoring and conservation in one of the most difficult terrain of the world, the Hindu Kush-Himalaya region.  He is the founder and long-term director of ‘Global Primate Network’ (now ‘Third Pole Conservancy’), a small NGO actively engaged in wildlife research and conservation activities in Nepal. Ganga graduated in Zoology and Primate Conservation from Nepal and Oxford Brooks/UK, he is also a Manager for the Nepal Snow Leopard Project funded by the Snow Leopard Conservancy, USA. Over the years Ganga has received many grants and prestigious  awards from the international community for his work on wildlife and biodiversity conservation in Nepal.