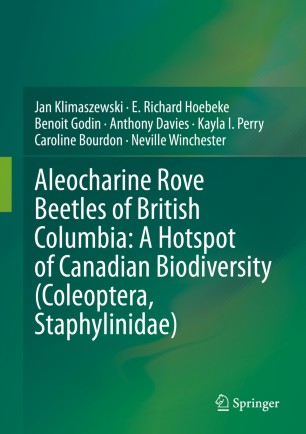 Aleocharine beetles are among the most poorly known and difficult-to-identify groups of Coleoptera worldwide. This book presents the first comprehensive synopsis of aleocharine rove beetle species (Coleoptera, Staphylinidae) from British Columbia, Canada. It is important to generate a structured inventory of species in hotspots of biodiversity like British Columbia, to provide baseline biodiversity data for monitoring species responses related to climate change. It is the first book to treat and illustrate every recorded and new species. For every species, color illustrations are provided, including color habitus and genital diagnostic structures of both sexes. Two hundred and twenty-seven valid species, including 14 new species, 16 new generic records, and 36 (excluding new species) new provincial and 6 state records, in 79 genera and 14 tribes.Tribes and subtribes are arranged in phylogenetic order as it is currently recognized, and genera and subgenera are listed alphabetically within each tribe or subtribe. Species are listed alphabetically or in species groups to better reflect their relationships. Species distribution is listed by provinces and territories in Canada and states in the United States, and the geographic origin of each species is categorized as native, Holarctic, adventive or undetermined (either adventive or Holarctic). Every species is presented with a morphological diagnosis including external and genital characters of both sexes. Collection and habitat data are presented for each species, including collecting period, and collecting methods. A list of all eastern Canadian species with their currently known distribution in North America is presented at the end of the book.

Jan Klimaszewski is a forest litter insect research scientist with the Canadian Forest Service at LFC, Quebec City. His research deals with taxonomy and ecology of Coleoptera, and particularly the large family Staphylinidae, which are mostly forest litter dwellers. Many species of this beetle family are sensitive indicators of forest change and are useful in environment impact studies. He has fruitful collaboration with research scientists all over the world. His research also deals with adventive species of Coleoptera in Canada and USA. Research Areas/Expertise: Taxonomy and biology of rove beetles (Staphylinidae), impact of forestry practices on forest litter biodiversity, adventive species of Coleoptera in Canada.
E. Richard Hoebeke is a systematic entomologist and the associate curator and collection manager of the Collection of Arthropods, Georgia Museum of Natural History at the University of Georgia, Athens, since 2011. Previously, he served as the assistant curator and collection manager of the insect collection at Cornell University, Ithaca, NY from 1977–2011. While a portion of his current research includes taxonomic studies of beetles of the megadiverse family Staphylinidae, his applied research focuses on the detection of and survey for non-indigenous invasive species among the North American insect fauna.  During the past four decades, he has been recognized as a national leader in the area of exotic pest detection, having discovered numerous insect species new to the Western Hemisphere, North America, or to the United States. Since 2001, he also has been an identification specialist supporting the joint USDA-APHIS and USDA Forest Service’s “Early Detection and Rapid Response” survey for exotic Curculionidae: Scolytinae (bark and ambrosia beetles).
Benoit Godin is a former Head of Environmental Assessment with Environment and Climate Change Canada in Whitehorse, Yukon. His areas of expertise are the environmental impact assessment for major industrial projects using aquatic and terrestrial insects, and the biogeography of Aleocharinae in Western Canada.
Anthony Davies is involved in curatorial responsibility of maintaining Coleoptera Collection in the Canadian National Insect Collection, participates in many research projects on Canadian rove beetles, is a coauthor of many revisions of different grups of Staphylinidae, and is responsible for identification.
Caroline Bourdon is a forestry technician who graduated from CEGEP de Ste-Foy, Quebec. She works as a research technician at the Laurentian Forestry Centre, Natural Resources Canada, where she is involved in many projects in forest entomology and pathology. She participated in research leading to 23 publications for this Center.
Neville Winchester is a research entomologist in the Biological Sciences Department at the University of Victoria were he holds an adjunct professor position and is a member of the teaching staff.  His special areas of research and interest include the diversity of arthropods, ancient rainforest ecology, and conservation biology.  Currently he is on the Board of Directors for the International Canopy Network (ICAN), and is the Project Manager for a study that is investigating flying insect biomass declines.
Kayla I Perry is an insect ecologist that investigates the drivers that structure and maintain insect communities in forest and urban ecosystems with a focus on the role of natural and anthropogenic disturbances. Her research centers on the biology and ecology of ground-dwelling arthropods, including Carabidae, Scarabaeidae, Geotrupidae, Staphylinidae, Silphidae, Formicidae, and families of Collembola. She has studied the impacts of disturbances caused by invasive species, windstorms, salvage logging, habitat fragmentation, and urban legacies of pollution on ground-dwelling arthropod communities. Kayla is currently a USDA NIFA Postdoctoral Fellow in the Department of Entomology at Ohio State University.