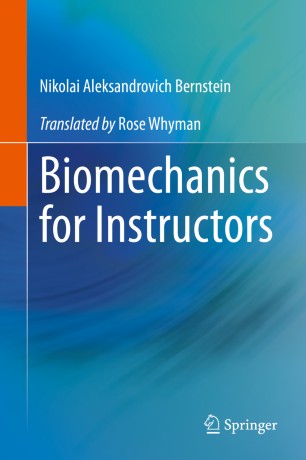 This book comprises a series of lectures given by celebrated Soviet neurophysiologist Nikolai Alexandrovich Bernstein in Moscow in 1925 and first published in Russian in 1926. Bernstein’s groundbreaking work, which has had a significant influence on the development of neuroscience, movement studies, and other fields of study in Russia, Eastern Europe, and the West, was suppressed during Stalin’s regime. At the time of its publication, Biomechanics for Instructors was a significant resource for teachers, with its descriptions of the movement of joints and degrees of freedom, illustrations of how to calculate the work capacity of muscles with bones acting as levers, the role of the central nervous system in movement, and more.

Though the terminologies and methods have changed and been updated as research and technologies have progressed, the book remains a valuable introduction for those interested in Bernstein’s work more generally, and to those involved in the study of biomechanics. This book is also of interest to historians and philosophers of neuroscience, as well as those involved in movement studies in both the scientific and artistic domains, and to physiotherapists and those involved in sports research and practice.

Rose Whyman is a Senior Lecturer in Drama and Theatre Arts at the University of Birmingham. UK. She has a PhD on the Stanislavsky System and the science of actor training. Publications include The Stanislavsky System of Acting; Legacy and Influence in Modern Performance’ CUP (2008) Anton Chekhov, Routledge (2010) Stanislavski - the Basics, Routledge (2012). She is currently working on a book entitled Performance in Revolutionary Russia: the Art and Science of Biomechanics for Routledge. She is a member of the Professional Association of Alexander Teachers and runs courses on the Alexander Technique for Performers.