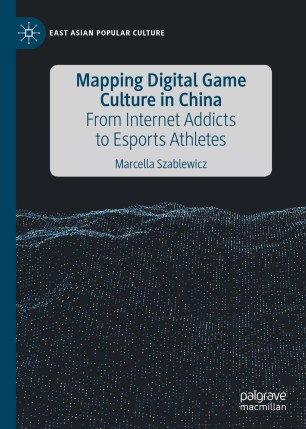 From Internet Addicts to Esports Athletes

‘Mapping Digital Game Culture in China brings refreshing cultural studies perspectives to China studies by analyzing competing narratives about digital gaming and the contested ideological forces that give rise to them. Szablewicz’s innovative approach generates unique insights into a new media and popular cultural phenomenon with latent political implications. Her rich ethnography invites us to more critically reflect on a historical period of dramatic economic, cultural, and technological changes within China and beyond.’

In this book, Marcella Szablewicz traces what she calls the topography of digital game culture in urban China, drawing our attention to discourse and affect as they shape the popular imaginary surrounding digital games. Szablewicz argues that games are not mere sites of escape from Real Life but rather locations around which dominant notions about failure, success, and socioeconomic mobility are actively processed and challenged. Covering a range of issues including nostalgia for Internet cafés as sites of youth sociality, the media-driven Internet addiction moral panic, the professionalization of e-sports, and the rise of the self-proclaimed loser (diaosi), Mapping Digital Game Culture in China uses games as a lens onto youth culture and the politics of everyday life in contemporary China. Based on ethnographic fieldwork conducted between 2009 and 2015 and first-hand observations spanning over two decades, the book is also a social history of urban China’s shifting technological landscape.

Marcella Szablewicz is an Assistant Professor in the Department of Communication Studies at Pace University in New York City and a former Mellon postdoctoral fellow at the Massachusetts Institute of Technology.

Dr. Marcella Szablewicz is Assistant Professor of Communication Studies at Pace University in New York City, where she teaches classes about digital media, popular culture, and moral panics about technology. She is a former recipient of a Fulbright scholarship and previously served as a Mellon Postdoctoral Fellow at the Massachusetts Institute of Technology. Her work has been published in peer-reviewed journals such as Games and Culture and the Chinese Journal of Communication, and she has authored chapters in Online Society in China (2011) and China’s Contested Internet (2015). You may follow her on Twitter @MSzabs or on her website, www.feiyaowan.com.

“The book is a great contribution to the ever-expanding series of books on video games in general, and it is an important book for every researcher, since it helps broaden their horizons. After reading this book, you will see China differently.” (Mária Koscelníková, Acta Ludologica, Vol. 3 (1), 2020)