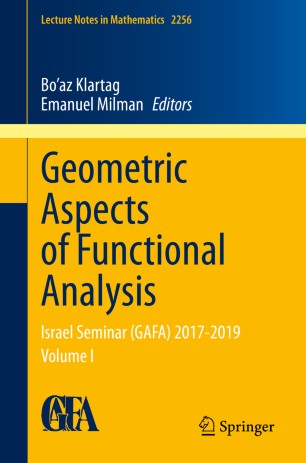 Continuing the theme of the previous volume, these seminar notes reflect general trends in the study of Geometric Aspects of Functional Analysis, understood in a broad sense. Two classical topics represented are the Concentration of Measure Phenomenon in the Local Theory of Banach Spaces, which has recently had triumphs in Random Matrix Theory, and the Central Limit Theorem, one of the earliest examples of regularity and order in high dimensions. Central to the text is the study of the Poincaré and log-Sobolev functional inequalities, their reverses, and other inequalities, in which a crucial role is often played by convexity assumptions such as Log-Concavity. The concept and properties of Entropy form an important subject, with Bourgain's slicing problem and its variants drawing much attention. Constructions related to Convexity Theory are proposed and revisited, as well as inequalities that go beyond the Brunn–Minkowski theory. One of the major current research directions addressed is the identification of lower-dimensional structures with remarkable properties in rather arbitrary high-dimensional objects. In addition to functional analytic results, connections to Computer Science and to Differential Geometry are also discussed.