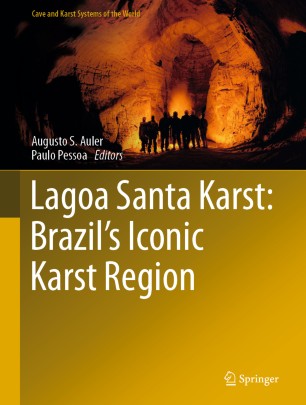 This book discusses the Lagoa Santa Karst, which has been internationally known since the pioneering studies of the Danish naturalist Peter Lund in the early 1800s. It covers the speleogenesis, geology, vegetation, fauna, hydrogeology, geomorphology, and anthropogenic use of the Lagoa Santa Karst and is the first English-language book on this major karst area.
The area, which has been at the heart of the debate on the origin and age of human colonization in the Americas, is characterized by a classical and scenic karst landscape with limestone cliffs, karst lakes and karst plains, in addition to numerous solution dolines. More than 1,000 caves have been documented in the area, many with significant archeological and paleontological value. Despite its great importance, the Lagoa Santa Karst faces severe environmental threats due to limestone mining and the expansion of the metropolis of Belo Horizonte and its surrounding towns. The growing recognition of the area’s remarkable significance has led to increasing concern, and a number of protected areas have now been established, improving the conservation status of this landmark karst area.