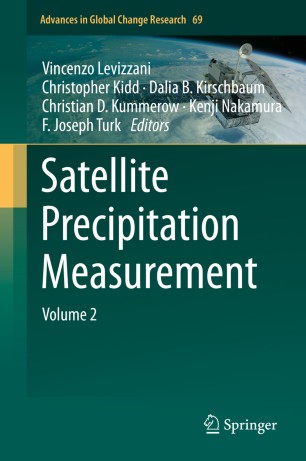 This book offers a complete overview of the measurement of precipitation from space, which has made considerable advancements during the last two decades. This is mainly due to the Tropical Rainfall Measuring Mission (TRMM), the Global Precipitation Measurement (GPM) mission, CloudSat and a carefully maintained constellation of satellites hosting passive microwave sensors. The book revisits a previous book, Measuring Precipitation from Space, edited by V. Levizzani, P. Bauer and F. J. Turk, published with Springer in 2007. The current content has been completely renewed to incorporate the advancements of science and technology in the field since then. This book provides unique contributions from field experts and from the International Precipitation Working Group (IPWG).

The book will be of interest to meteorologists, hydrologists, climatologists, water management authorities, students at various levels and many other parties interested in making use of satellite precipitation data sets.

Vincenzo Levizzani is Director of Research at the Institute of Atmospheric Sciences and Climate of the National Council of Research in Bologna, Italy, and Professor of Cloud Physics at the University of Bologna. His research interests concentrate on cloud structure, precipitation measurement from space, regional climatology of clouds and precipitation and new space mission concept design. He was among the co-founders of the International Precipitation Working Group and has collaborated to clouds and precipitation missions of the European Organization for the Exploitation of Meteorological Satellites (EUMETSAT) and the European Space Agency (ESA). He is author of several hundreds peer-reviewed journal publications, book contributions and scientific reports, and has served in several high-level committees of WMO, NASA, ESA, EUMETSAT, KMA, European Commission, etc.

Christopher Kidd obtained a BSc in Geography from the University of Nottingham, followed by a PhD from the University of Bristol. He has been at the forefront of satellite precipitation estimation over the last 30 years, focusing upon retrieval schemes from both passive microwave observations and multi-sensor observations, together with the verification, validation and inter-comparison of satellite estimates and surface measurements.

Dalia B. Kirschbaum is a Research Physical Scientist in the Hydrological Sciences Lab at NASA Goddard Space Flight Center in Greenbelt, Maryland. She has served as the Global Precipitation Measurement (GPM) Mission Associate Deputy Project Scientist for Applications since 2009, where she leads a team of outreach and applications specialists to provide scientific support for applications research and activities. Her research interests center on the application of GPM data to rainfall-triggered landslide modeling efforts, including a global landslide situational awareness system that is being used worldwide. She has authored over forty papers on the topic of applying remotely sensed surface and precipitation information to landslide hazard models at multiple spatial and temporal scales.

Christian D. Kummerow is Professor of Atmospheric Science at Colorado State University where he also serves as Director of the Cooperative Institute for Research in the Atmosphere (CIRA). He has spent much of his career studying the global water and energy cycles. He is particularly interested in observing the global water cycle and its uncertainties – how uncertainties relate to physical aspects of the atmosphere, and thus the fundamental processes underlying precipitation. From 1997 to 2000 he served as the TRMM Project Scientist and continues to serve on the science steering teams of both the TRMM as the Global Precipitation Mission where he leads the team responsible for the passive microwave rainfall products. He has authored over one hundred peer reviewed journal publications related to global clouds and the hydrologic cycle.

Kenji Nakamura is Professor of the Department of Economics on Sustainability, Faculty of Economics in Dokkyo University, Japan. Before Dokkyo University, he was a professor at Nagoya University, Japan, and he was the Director of the Hydrospheric-Atmospheric Research Center, Nagoya University during 2001-2005 and 2011-2013. His specialization is in microwave remote sensing techniques, multi-wavelength and dual-polarization radar techniques, and precipitation science. He led the Tropical Rainfall Measuring Mission (TRMM) and the Global Precipitation Measurement (GPM) projects in Japan. He served as a Member of the Board of Directors of the Meteorological Society of Japan and a Senior advisor of the Earth Observation Research Center, the Japan Aerospace Exploration Agency. He is a recipient of Fujiwhara Award of the Japan Meteorological Society.

F. Joseph Turk is a radar scientist with the Jet Propulsion Laboratory, California Institute of Technology, Pasadena, CA. His research has been related to a variety passive and active microwave measurements and remote sensing techniques. He has been involved with NASA satellite measurements for precipitation (GPM, TRMM) and scatterometry (QuikSCAT, RapidScat), a number of airborne field campaigns for studying convective clouds and hurricanes, and a member of the science team for the Radio Occultations though Heavy Precipitation (ROHP) instrument. He has been a member of the AMS Satellite Meteorology and Oceanography Committee, and Editor for the AMS Journal of Hydrometeorology and active in the IPWG since its inception.