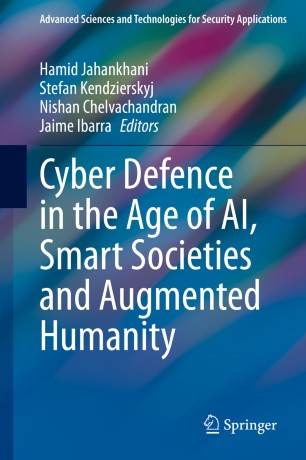 Cyber Defence in the Age of AI, Smart Societies and Augmented Humanity

This publication highlights the fast-moving technological advancement and infiltration of Artificial Intelligence into society. Concepts of evolution of society through interconnectivity are explored, together with how the fusion of human and technological interaction leading to Augmented Humanity is fast becoming more than just an endemic phase, but a cultural phase shift to digital societies. It aims to balance both the positive progressive outlooks such developments bring with potential issues that may stem from innovation of this kind, such as the invasive procedures of bio hacking or ethical connotations concerning the usage of digital twins. This publication will also give the reader a good level of understanding on fundamental cyber defence principles, interactions with Critical National Infrastructure (CNI) and the Command, Control, Communications and Intelligence (C3I) decision-making framework. A detailed view of the cyber-attack landscape will be garnered; touching on the tactics, techniques and procedures used, red and blue teaming initiatives, cyber resilience and the protection of larger scale systems. The integration of AI, smart societies, the human-centric approach and Augmented Humanity is discernible in the exponential growth, collection and use of [big] data; concepts woven throughout the diversity of topics covered in this publication; which also discusses the privacy and transparency of data ownership, and the potential dangers of exploitation through social media. As humans are become ever more interconnected, with the prolificacy of smart wearable devices and wearable body area networks, the availability of and abundance of user data and metadata derived from individuals has grown exponentially. The notion of data ownership, privacy and situational awareness are now at the forefront in this new age.