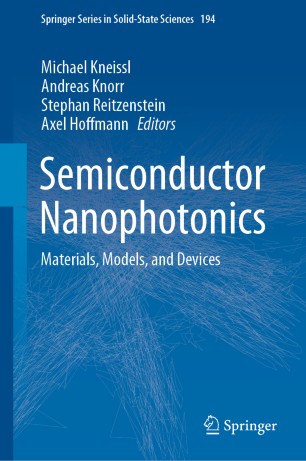 This book provides a comprehensive overview of the state-of-the-art in the development of semiconductor nanostructures and nanophotonic devices. It covers epitaxial growth processes for GaAs- and GaN-based quantum dots and quantum wells, describes the fundamental optical, electronic, and vibronic properties of nanomaterials, and addresses the design and realization of various nanophotonic devices. These include energy-efficient and high-speed vertical cavity surface emitting lasers (VCSELs) and ultra-small metal-cavity nano-lasers for applications in multi-terabus systems; silicon photonic I/O engines based on the hybrid integration of VCSELs for highly efficient chip-to-chip communication; electrically driven quantum key systems based on q-bit and entangled photon emitters and their implementation in real information networks; and AlGaN-based deep UV laser diodes for applications in medical diagnostics, gas sensing, spectroscopy, and 3D printing.

The experimental results are accompanied by reviews of theoretical models that describe nanophotonic devices and their base materials. The book details how optical transitions in the active materials, such as semiconductor quantum dots and quantum wells, can be described using a quantum approach to the dynamics of solid-state electrons under quantum confinement and their interaction with phonons, as well as their external pumping by electrical currents. With its broad and detailed scope, this book is indeed a cutting-edge resource for researchers, engineers and graduate-level students in the area of semiconductor materials, optoelectronic devices and photonic systems.

Michael Kneissl is the Executive Director of the Institute of Solid State Physics and chair of Experimental Nanophysics and Photonics at the Technical University of Berlin (TU Berlin), Germany. He holds a dual appointment at the Ferdinand-Braun-Institute (FBH) in Berlin, where he heads the Joint Lab GaN Optoelectronics and is also spokesperson of the Collaborative Research Center “Semiconductor Nanophotonics” (CRC 787). His interests include group III-nitride semiconductor materials, metal organic vapor phase epitaxy of wide bandgap semiconductors and nanostructures as well as novel optoelectronic devices, including UV LEDs and laser diodes. He has co-authored over 300 publications, five book chapters, and holds more than 60 patents in the area of group II-nitride device technologies. He recently co-edited a book on "III-Nitride Ultraviolet Emitters - Technology & Applications" which was published in 2016 within the Springer Series on Material Science. In 2016 Michael Kneissl was named Fellow of the Institute of Electrical and Electronics Engineers (IEEE) for his contributions to the development of wide bandgap semiconductor laser diodes and ultraviolet LEDs.

Andreas Knorr works in the field of nonlinear optics and quantum electronics of nanostructured solids. His research is focused on the interaction of light and matter, self-consistent solutions of Maxwell- and material equations and many body effects in open quantum systems. Since 2000 Andreas Knorr holds a professorship at the TU Berlin. His scientific career, which started at the Friedrich-Schiller-University Jena led him to the Universities of New Mexico, Arizona (College of Optical Sciences), Marburg, Göttingen, Auckland, Kingston and to Sandia National Labs Albuquerque and NTT Tokio. He was a Divisional Editor of Physical Review Letters from 2013-2018.

Stephan Reitzenstein is Director of the Center of Nanophotonics of the Institute of Solid State Physics at  theTU Berlin and holds the chair of Optoelectronics and Quantum Devices. His research interests focus on the development and study of nanophotonic devices and structures based on III/V semiconductor materials. Present activities include the realization of cavity-enhanced microlasers with ultra-low threshold powers, quantum-light sources for applications in advanced long-distance quantum communication and photonic circuits for on-chip quantum photonics. He has co-authored four book chapter and more than 180 publications in peer-reviewed international journals. In 2014 Stephan Reitzenstein received a prestigious EU ERC Consolidator Grant on the external quantum control of photonic semiconductor nanostructures.

Axel Hoffmann was director at the Institute of Solid State Physics  and is now Guest Professor at the TU Berlin. His research expertise includes materials microcharacterization, ultra-fast phenomena in semiconductors, micro- and nanao- Raman spectroscopy, electro-optical properties in organic materials, optical properties of quantum dots, microcharacterization of organic devices, optical-properties and - gain of group-III nitrides, oxides and arsenides, spintronics, He has co-authored 545 peer reviewed publications, 102 conference papers ( 71 invited papers), 10 book chapters and 9 patents. In 2009 and 2015 he was Guest Professor at the University of Technology, Sydney, Australia.