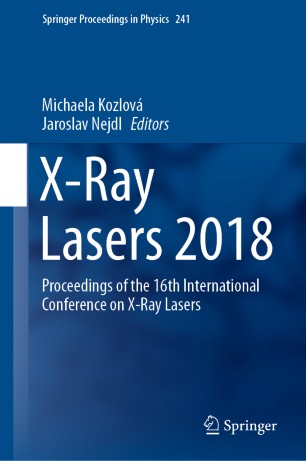 Proceedings of the 16th International Conference on X-Ray Lasers

These proceedings gather a selection of invited and contributed papers presented during the 16th International Conference on X-Ray Lasers (ICXRL 2018), held in Prague, Czech Republic, from 7 to 12 October 2018. The conference is part of an ongoing series dedicated to recent developments in the science and technology of X-ray lasers and other coherent X-ray sources, with an additional focus on supporting technologies, instrumentation and applications.

The book highlights advances in a wide range of fields including laser and discharge-pumped plasma X-ray lasers, the injection and seeding of X-ray amplifiers, high-order harmonic generation and ultrafast phenomena, X-ray free electron lasers, novel schemes for (in)coherent XUV, X-ray and γ-ray generation, XUV and X-ray imaging, optics and metrology, X-rays and γ-rays for fundamental science, the practical implementation of X-ray lasers, XFELs and super-intense lasers, and the applications and industrial uses of X-ray lasers.

Michaela Kozlová is the head of a Ti:Sapphire laser laboratory at PALS Research Center, and is intensively involved in the program on laser-driven X-ray sources at the ELI Beamlines project. Holding a Ph.D. (2010) from the Czech Technical University in Prague, she has previously worked as a research fellow at laboratories in France, the United Kingdom, Germany, and South Korea. Her work chiefly focuses on laser-driven secondary sources in the X-ray region, including plasma-based X-ray lasers, electron acceleration by lasers, betatron or Compton X-ray sources, and their metrology and applications.

Jaroslav Nejdl is currently the head of a research program on laser-driven X-ray sources at the ELI Beamlines facility. After receiving his B.Sc. (2006), M.Sc. (2009) and Ph.D. (2012) from the Czech Technical University in Prague, he spent one year at the LOA, ENSTA ParisTech, France, and a subsequent year at CSU, USA, where he worked as a research fellow. While his earlier work focused on plasma-based X-ray lasers and their applications, he is currently pursuing research into various types of laser-driven short-wavelength sources, both coherent and incoherent.