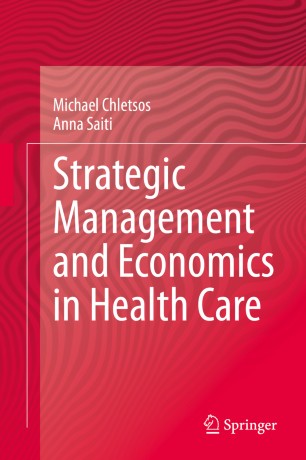 This book offers significant managerial and economic knowledge on hospitals, and will serve as a valuable tool for explaining complicated managerial and economical problems, and for facilitating decision-making processes. It bridges management and economic sciences - two complementary sciences that feed the process of making rational decisions. With particular reference to the education, the main aim of this book is to provide students of relevant schools and departments with the knowledge (managerial and economic) that will enable them to deal both efficiently and effectively with the real problems arising in a health care organization such as a hospital. In particular, by equipping students with appropriate managerial and economic knowledge, the aim is to give them a clear understanding of HOW to deal with the diverse and complex problems of hospitals while at the same time helping them to develop strategic approaches that will make hospitals more efficient and sustainable.

Dr Anna Saiti, is a Professor of Management and Economics of Education, in the Department of Home Economics & Ecology, Harokopio University, Athens, Greece. She received her Bachelor Decree in Organization and Business Administration from the University of Piraeus, Athens, Greece, her M.A. in Banking and Finance from the University of North Wales, Bangor, U.K., and her PhD in Administration and Economics of Education from the University of Hull, Hull, U.K. Her research interests focus on the management and economics of education and health as well as the labor market. She has participated in several international conferences and she was involved in an applied international research project associated with School leadership and equity. She is an active member in International Scientific Organizations. Currently she is involved and the scientific head in a project on health economics. She is the author of six books (in Greek) and two books in English published by Springer publication. She has written several articles regarding management and economics of education and health care published by international scientific journals.  She has been a reviewer for several international scientific journals and she has also been a reviewer for book proposals. Moreover, her papers and books have been cited by many Greek and foreign researchers. As a PhD supervisor, she granted four PhD for the thesis (2012, 2016, 2018). She is currently a supervisor of two PhD Theses.