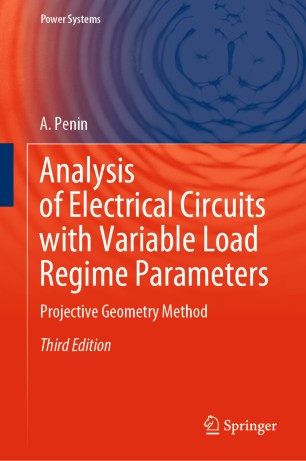 This book introduces readers to electric circuits with variable loads and voltage regulators. It defines invariant relationships for numerous parameters, and proves the concepts characterizing these circuits. Moreover, the book presents the fundamentals of electric circuits and develops circuit theorems, while also familiarizing readers with generalized equivalent circuits and using projective geometry to interpret changes in operating regime parameters. It provides useful expressions for normalized regime parameters and changes in them, as well as convenient formulas for calculating currents.
This updated and extended third edition features new chapters on the use of invariant properties in two-port circuits, invariant energy characteristics for limited single-valued two-port circuits, and on testing projective coordinates. Given its novel geometrical approach to real electrical circuits, the book offers a valuable guide for engineers, researchers, and graduate students who are interested in basic electric circuit theory and the regulation and monitoring of power supply systems.

A. Penin graduated from the Institute of Radioelectronics and Telecommunications at Odessa National Polytechnic University in 1974. With a professional engineering interest in the field of power electronics, from 1980 to 2006 he worked at the Academy of Sciences of Moldova’s solid-state electronics design office, chiefly in the area of power supply systems. Since 2006, he has been working at the Academy of Sciences of Moldova’s Institute of Electronic Engineering and Nanotechnologies, where he is pursuing independent theoretical research on electric circuit theory with variable regimes. He is currently a senior research assistant, having completed his Ph.D. in 2011 and his habilitation qualification (Dr. habil.) in 2017. He has more than 80 publications, 50 Moldovan patents, one European patent, and two books to his credit.