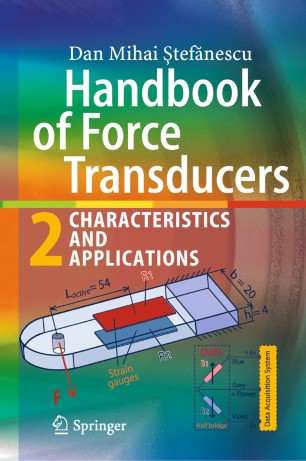 This handbook could best be described as a “potpourri” of ideas and applications in the field of measurement, instrumentation and transducers. Among them, Strain gauges – Wheatstone bridges – Force transducers – Mechanical testing – Electrical measurement – Virtual instrumentation are dominating the story, like a red thread, a root of all facets treated by the author. It is addressed mainly to students, technicians, engineers, researchers and other people desiring to broaden their knowledge area and get new specific information.

The book’s table of contents is rather balanced, going from simple to complex in 21 chapters. Most delicate subjects, such as force feedback, force control, force vision, smart / intelligent force transducers, virtual measurement, are gradually presented and properly explained.

More than 200 illustrations (colorful, complex, suggestive, and informative) and 260 bibliographical references (a quarter from which belonging to the author) bring a plus of value and strength to this spectacular and unique work about various applications with strain gauge force transducers (SGFTs) and their characteristics. It is to be noted the uniform figuring of the strain gauges, connected in Wheatstone bridge after their bonding on the elastic elements of single- or multi-component SGFTs, observing the adopted color convention: red – increasing resistance for (mechanical) tension (T) and blue – decreasing resistance for compression (C).

Perhaps one could object to somehow “overloading” certain pictures. An explanation could be the author’s desire to “squeeze” more information into individual images. This could be a great advantage especially for young people, who prefer “concentrated” information and quick learning. Both online and printed editions enjoy and benefit from the “kaleidoscopic” (and often “encyclopedic”) content of this book.

Dan Mihai Ştefănescu, born in Bucharest on 6 April 1946, received BS (1969) in Applied Electronics, MS (1983) in Experimental Stress Analysis and PhD cum laude (1999) in Electrical Engineering, all from the “Politehnica” University of Bucharest. He worked as Senior Researcher in Measurement Techniques with the National Institute for Aerospace Research in Bucharest (1969 – 2003). He completed a Postdoctoral Fellowship (NATO grant) on Knowledge-based Intelligent Systems for Selecting Industrial Sensors at Twente University of Enschede, The Netherlands (2002). He was Visiting Scientist within Korean Research Institute of Standards and Science, conducting a project on Force Transducers Optimization by Numerical Methods (2004) and then within Center for Measurement Standards in Taiwan, R.O.C., leading a project on Improved Portable Truck Scales (2005). Now, he is Senior Consultant for the Romanian Measurement Society. His current research interests: electrical measurement of mechanical quantities, material testing installations and metrological procedures for multicomponent transducers. He delivered 46 conferences and published 4 books, 2 book chapters and 192 papers in 40 countries on all continents (minus Antarctica). He is member of the Verband Deutscher Electrotechniker (1987) and Romanian representative (1988) as well as member of the General Council of IMEKO – International Measurement Confederation (2015).