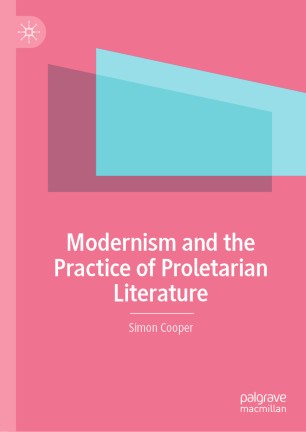 Modernism and the Practice of Proletarian Literature

This book tests critical reassessments of US radical writing of the 1930s against recent developments in theories of modernism and the avant-garde. Multidisciplinary in approach, it considers poetry, fiction, classical music, commercial art, jazz, and popular contests (such as dance marathons and bingo). Relating close readings to social and economic contexts over the period 1856–1952, it centers in on a key author or text in each chapter, providing an unfolding, chronological narrative, while at the same time offering nuanced updates on existing debates. Part One focuses on the roots of the 1930s proletarian movement in poetry and music of the nineteenth and early twentieth centuries. Part Two analyzes the output of proletarian novelists, considered alongside contemporaneous works by established modernist authors as well as more mainstream, popular titles.
Simon Cooper is a senior lecturer in further education. After leaving university, he worked as a freelance writer, publishing in titles including the Big Issue. He has acted as secretary of a housing co-operative in the North East of England and worked on community access to higher education courses.