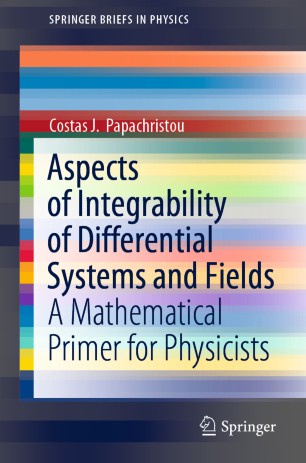 Aspects of Integrability of Differential Systems and Fields

A Mathematical Primer for Physicists

This book serves as an introduction to the concept of integrability as it applies to systems of differential equations as well as to vector-valued fields.

The author focuses on specific aspects of integrability that are often encountered in a variety of problems in applied mathematics, physics and engineering. The following general cases of integrability are examined: (a) path-independence of line integrals of vector fields on the plane and in space; (b) integration of a system of ordinary differential equations by using first integrals; and (c) integrable systems of partial differential equations. Special topics include the integration of analytic functions and some elements from the geometric theory of differential systems. Certain more advanced subjects, such as Lax pairs and Bäcklund transformations, are also discussed.

The book is written at an intermediate level for educational purposes. The presentation is as simple as the topics allow, often sacrificing mathematical rigor in favor of pedagogical efficiency.

Dr. Costas J. Papachristou is a senior faculty member at the Hellenic Naval Academy (The Naval Academy of Greece). He received a Ph.D. in Theoretical Physics from Brigham Young University, USA, and spent another year at BYU as a research faculty in Physics. At the HNA he teaches freshman- and sophomore-level Physics. His research interests are mainly in Theoretical and Mathematical Physics (in particular, symmetry and integrability properties of classical field equations, classical electromagnetism) but he is also active in Physics Education. He is an amateur musician and a columnist for Greek newspapers and magazines.